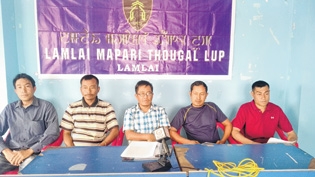 By Our Staff Reporter
IMPHAL, Apr 4: Oath taking sit ins will be held in place of the mass rally which was planned to be held on April 11 in Lamlai area organised by Lamlai Mapari Thougal Lup in support of 'War on Drugs'.
Laishram Bobisana said this at a press conference held today at Manipur Press Club and said the organisation had even planned to have the rally flag off by the Chief Minister. However, in light of the impending second wave and the new directives issued by the Government, an oath taking sit-ins of 50 persons each at various locations will be held in place of the mass rally.
He added the new changes will have more impact as more than 1000 people will take resolutions to not use and sell drugs and intoxicants in Lamlai area.
All the sit-ins will be held in strict maintenance of all the SOP, he added.