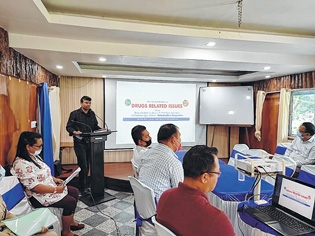 CCPUR, Apr 5 (DIO)
The need to formulate a strong State-centric drug control laws to combat drug menace including its production/cultivation was highlighted at a district level seminar held today at the conference hall of Victor’s Rest Farm, Muolvaiphei here.
The district level seminar on Drugs Related Issues was organised by the Churachandpur district administration under Nasha Mukt Bharat Abhiyan campaign and as a part of its continuing efforts to combat drug abuse and related issues. Resource persons from varied background including the Police, Assam Rifles, independent researchers and subject experts presented papers on the topic.
While expressing serious concern over the ‘disturbing phenomenon’ of the State becoming a net producer of drugs from being net consumers, resource persons of today’s seminar suggested strengthening of border infrastructure to combat drug menace.
It was also suggested that setting up of drug intelligence unit in the Police Department will go a long way in the fight against drugs related threats the society is facing now. It was also strongly suggested that the ‘moral justification’ offered by poppy cultivators need to be re-oriented and the awareness on the illegality of poppy cultivation should be spread on a greater degree than now. It was also suggested that a holistic approach should be adopted in a planned manner.
It was then emphasised that a strong State-centric drug control laws in line with the Maharashtra Control of Organised Crime Act (MACOCA) should be formulated to combat drug menace and deter illicit cultivation/production of drugs in the State.
Presenting a paper on ‘Alternative to Poppy Cultivation,’ Ph Chandramani Singh, subject matter specialist (Horticulture), ICAR-KVK Churachandpur suggested cultivation of medicinal and aromatic plants as a possible alternative to replace poppy cultivation in the State while also naming ‘Lemon Grass’ cultivation as one viable option.
A farmer cannot be simply insisted to grow certain crops or plants without having transportation and marketing facilities and also having good transportation and marketing facilities are a must to persuade farmers to switch to alternative crops.
If processing units are established in the State with financial assistance from the Government and funding agencies, it will go a long way in enhancing farmers’ income, Chandramani added.
Other resource persons also suggested adoption of new approach such as imbibing drugs education among school going children; helping drug abusers instead of punishing them; adopting top-down approach and spreading awareness to stop stigmatization of drug users.
Kam Ngaihte, retd IFS was the guest of honour. The programme was attended by Deputy Commissioner  Pawan Yadav; Addl DC Thangboi Gangte; SDOs and other district level officers.
Thangboi Gangte, Addl DC gave a report on the activities taken up under Nasha Mukt Bharat Abhiyan in the district. He said that the campaign was launched on August 15, 2020 on the occasion of the 74th Independence Day of India at Saikot playground.
Since then a number of activities have been taken up including training of master volunteers on November 13, 2020; capacity building of rehabilitation centres on December 9, 2020;  Nasha Mukt Bharat awareness with village chiefs, CSOs and distribution of cardamom seedlings at Singhat on January 13, 2021; two-wheelers rally against poppy cultivation on February 16, 2021; awareness campaign against illicit poppy cultivation among village chiefs at Kholmun community hall on March 3, 2021.
Nasha Mukt Bharat pledge was also taken by students of various schools apart from institutional visits to rehabilitation centres. Besides, candlelight vigil was held against drug abuse by members of M Songgel and K Molhoi Youth Clubs and NMBA youth clubs were formed at the two villages.
Launching of NMBA campaign T-Shirt by Vungzagin Valte, Minister (TA & Hills, Transport & GAD) in the presence of other MLAs of the district on March 25 last at YMA Hall, Hmuia Veng was another activity carried out under NMBA in the district, he said.