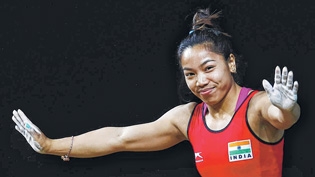 NEW DELHI, Apr 6
Star Indian weightlifter Mirabai Chanu's chances of winning a medal at the upcoming Olympics received a shot in the arm on Tuesday after North Korea announced it will not be participating in the Tokyo Games.
North Korea pulled out of the Tokyo Olympics, to be held from July 23 to August 8, to protect its athletes from the "world public health crisis caused by COVID-19."
Former world champion Chanu currently occupies the fourth place in the women's 49kg Tokyo Games qualifying rankings with 3869.8038 Robi points the International Weightlifting Federation's official calculation method.
Her nearest rival, Ri Song Gum of North Korea, who had pipped Chanu to take the bronze medal at the 2019 World Championship by lifting 204kg as against 201kg by the Indian, is placed third with 4209.4909 points.
Thus, Chanu stands to gain if North Korea sticks to its decision of withdrawing from the Tokyo Olympics.
"We are happy to hear this news about North Korea withdrawing from the Olympics. But, honestly our focus was on competing with China," national coach Vijay Sharma told PTI.
"At the end of the day, individual performance is most important and we will give our best in the Asian Championship next week," he added.
The latest qualifying rankings feature three Chinese weightlifters in the top five. Hou Zhihui (4703.1982) heads the list while reigning world champion and world record holder Jiang Huihua (4667.8878) and Zhang Rong (3837.8294) occupy the second and fifth spots respectively.
However, only one of the three Chinese lifters will be able to compete at the Olympics as a nation can send only one athlete per weight category, effectively making Chanu the second best lifter in her category.
As things stand, in terms of total weight lifted, only Huihua (212kg), Zhihui (211kg) and Gum (209kg) have lifted more than Chanu (201kg). The other lifters are significantly behind the Indian, the closest being USA's Delacruz Jourdan Elizabeth, whose best effort is 195kg, followed by Indonesia's Aisah Windy Cantika (190kg).
Chanu had a disappointing outing at the 2016 Rio Olympics. The diminutive Manipuri had failed to record a legal lift in any of her three attempts in clean & jerk and thus could not get an overall total in women's 48kg.
The 26-year-old will next be seen at the Asian Weightlifting Championships to be held at Tashkent in Uzbekistan from April 16 to 25.         PTI