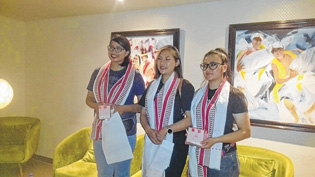 By Our Staff Reporter
IMPHAL, Apr 7: Three women bikers, who are touring the 7 North-East States under the banner “Breaking Stereotype and Redefining North-East” reached Imphal today.
The three bikers include Nirmali Nath from Assam, Rosalynn Lushai from Mizoram and Onen Nenty from Nagaland. They started the 7 day tour to 7 NE States from Guawahati last Saturday.
They travelled from Guwahati to Shillong then Silchar-Agartala-Aizawl and reached Jiribam yesterday before arriving at Imphal this noon.
They were given warm welcome at the Classic Grande, Imphal by the Manipur Tourism Forum.
Forum’s founder president Dr Th Dhaballi, president Kh Krishnan and former president Radhakrishna Sharma presented traditional shawl and other welcome gifts to the three bikers.
Biker and musician, Onen Nenty said their tour aims at shedding the stereotype about women. Women shouldn’t be confined inside the four walls of the house and seen as housewives only. The tour is about breaking this aged and outdated belief, she said.
She further added that their also aims at promoting sisterhood among the seven North-East States.
Nirmali Nath said they organised the tour exchanging ideas on social media. Originally, the plan was to include one woman biker from each States, she said adding that  their tour will cover about 2,500 kilometres.
While Rosalynn and Nirmali had earlier embarked on such tours, this is the first time for Onen.
The three said they are planning to tour South East Asia, however there is uncertainty as Myanmar is currently facing a military coup.
The three will leave Imphal for Dimapur tomorrow.
They will further visit Assam’s Tezpur and Arunachal Pradesh’s Itanagar and complete the tour at Kaziranga National Park.