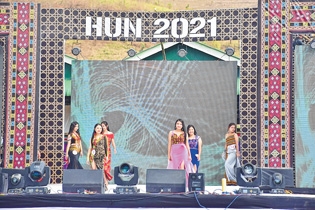 By Our Staff Reporter
IMPHAL, Apr 7: Tribal Affairs & Hills Minister, Vungzagin Valte has called for the preservation and promotion of tribal cultures and values through festivals.
He was speaking as chief guest in the inaugural function of the Thadou cultural festival- Hun, 2021 at Brigadier Thomas Ground in Kangpokpi district today.
The TA & Hills Minister said that the tribal people should not abandon their own cultural affinities and traditional values.
Observing that tribal cultures and festivals should be instrumental in bringing harmony and peace among the tribal people, Vungzagin Valte further expressed his desire for organizing a State level Tribal Cultural Festival.
In her presidential speech, Kangpokpi A/C MLA, Nemcha Kipgen said that Hun is an important cultural festival of the Thadou tribe which portrays/depicts the said community’s way of life.
“It is a cultural and traditional heritage passed down by our forefathers. We are very fortunate that our forefathers through the generations have left us important and valuable cultural identities”, she added.
Nemcha Kipgen went on to state that one’s identities are guided and guarded by certain cultural values which are shown in the form of beliefs and practices, rituals and ceremonies, arts and literatures, traditions and customs among others.
Maintaining that cultural values should always be the guiding force that shapes identity, society and influence other cultures for peaceful coexistence, the MLA wished for bringing mutual respect and understanding for the well being of every individual and for the welfare and overall development of the Nation as a whole by the Hun festival.
While delivering the keynote address, Hun 2021 chairman Thangliensei Kipgen claimed that ‘Hun’ etymologically signifies time and season.
Conveying that Hun festival is celebrated for seven days, he said that it is more than a cultural festival which marks the civilizations of the Thadous.
He stated that Hun is the celebration of the arrival of the New Year in which many rites and rituals relating to new things are performed during the festival.
Saying that the festival is celebrated at the time when the seeds sowed in the fields are sprouting, the chairman added that it symbolizes the bringing of new lease of life and hope.
Moirang A/C MLA, P Sharatchandra among others also attended the function as guests of honour.
Performing rituals, cultural dances, songs and traditional rounds of Mr & Miss Thadou were the main highlights in the inaugural function of Hun.