Boots to forest personnel and monthly remuneration to KLNP guides handed over Sangais are the pride of Manipur : Nishikant 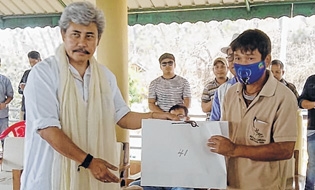 Our Correspondent
BISHNUPUR, Apr 6 : Conserving the State animal Sangai needs proper awareness and collective efforts of all, said Nishikant Singh Sapam today.
The owner of The Sangai Express and intending candidate in the forthcoming Assembly elections from Keishamthong Assembly Constituency was handing over boots to Forest personnel and monthly remuneration to two guides at the Keibul Lamjao National Park when he made the statement.
Nishikant provided boots to 52 people including forest personnel and Rs 5000 each as remuneration (for March month) to two guides at the park. Notably, Nishikant has been providing the monthly remuneration to Ningthoujam Kumarjit and Oinam Ratankumar, the two guides at the park since 2019 in a bid to encourage tourism and support them.
Talking about the importance of conserving the Keibul Lamjao National Park and the Sangai, he mentioned that the number of Sangais at the Manipur Zoological Garden has increased from 14 to 21 in a short span of two years.
Significantly, Nishikant has been funding a Sangai breeding project at the zoological garden.
“The Sangais are the pride of Manipur and I would continue to do everything in my capacity to conserve them. In a short period of two years, the number of Sangais at the Zoological Garden has increased to 14 from 21. This is a huge achievement in the efforts to conserve the Sangais and I feel proud as a Manipuri,” he said.
He continued that the boots and remunerations were handed over to the forest personnel and the guides personally to celebrate the success of breeding Sangais at the zoological garden.
The programme held at Keibul Lamjao National Park Second IB was also attended by Retired Chairman of Council of Higher Secondary Education Manipur (COHSEM), Dr H Naba, Forest Beat Officer Keibul Lamjao, S Sanahanba and others.