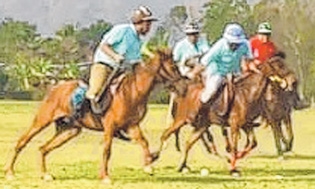 By Our Sports Reporter
IMPHAL, Apr 8 : Chingkheihunba Polo Club-A demolished Paradise Polo Club 13-0 to set up 1st Imphal East District Polo Tournament title clash with X-Polo Club, Wangkhei which carved out a 6-4 win against Chingkheihunba PC-B, Kongpal in the first semi-final match today.
X-Polo Club got off to a flying start against Chingkheihunba PC-B as P Vikash scored twice and L Atangba added a single. Kh Yaikhomba on the other hand pulled back a goal for the Kongpal team to make it 1-3 at the end of the first chukker.
Unexpectedly, the two sides drew blank in the second and the third chukker before Th Jacob, L Atangba and A Ranjan scored a goal each for the winning side. Chingkheihunba PC-B also managed 3 goals through Kh Rivaldo, H Pitam and Th Santosh but the early two goal deficit paid them dearly and X-Polo Club eventually had the 6-4 edge at the end.
Meanwhile in the second semi-final match, Th Kaoba showed off his riding and scoring skill by striking 7 goals alone with 5 goals coming up in the first chukker itself. Jogendra Kangjam followed Kaoba in scoring by adding four goals as Leishemba Takhellambam struck twice to complete the 13-0 annihilation of Paradise Polo Club.