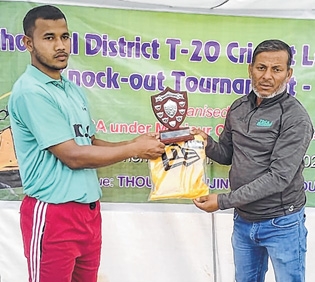 By Our Sports Reporter
IMPHAL, Apr 9 : LMCC, Mairenkhong bounced back from previous match defeat to overwhelm WYC, Wangkhem by 6 wickets in a last over thriller today at Moijing playground in the ongoing Thoubal District T-20 Cricket Tournament organised by Thoubal District Cricket Association under the aegis of Manipur Cricket Association.
WYC won the toss and chose to bat first. With Momocha (57) and Samungou (54) hitting half centuries, WYC posted a commendable total of 159 runs for 6 in 20 overs.
The innings saw Samir, Imran and Washim Akram of LMCC fetching two wickets each before Samir and Rafiq manned the crease and guided the team to 161 for 4 with two balls left to play.
Samir who led the bowling attack earlier topscored for LMCC with a 45-ball 69 while Rafiq gathered 53 off 43 balls. Reehaj was unbeaten on 26 as the team sealed the win. WYC's Mangi finished with the best bowling figure 2/24 in four overs in this inning as Sangker and Tomba earned a wicket each.
Samir was eventually named man of the match.
Today's first match between RCA and Al-Ameen was postponed due to rain.
Tomorrow, RCA will play LMCC in the morning at the same venue before CAL face off AKSDO in the evening.