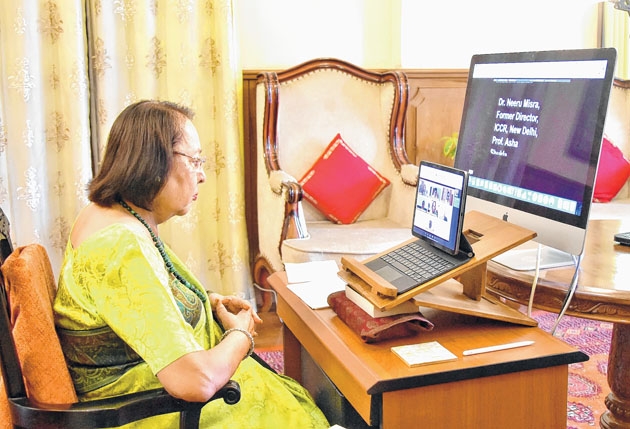 Imphal, May 16 (DIPR)
Manipur Governor Dr Najma Heptulla yesterday graced the inaugural session of Azadi Ka Amrut Mahotsav programme as chief guest through Google Meet Platform at Raj Bhavan, Imphal.
Speaking at the inaugural programme, she said  that the idea behind the commemoration of 75 years of Independence is to establish a symbiotic link between our yesterday and today so as to enthuse our future generation with a view to effectively protect our hard-earned freedom and maintain unity of our Motherland.
Recalling the invaluable contributions made by the people of Manipur to attain freedom of the country from the mite of the British colonialism, the Governor said that the role of Manipur in the field of Freedom movement is well-known and hardly needs to be recounted.
The history of the freedom movement in which people from Manipur participated, dates back to 1891 when the last and decisive battle was fought at Khongjom which led to Manipur’s subjugation and extension of British Empire over the State. Though the battle was lost, sacrifices of Major General Paona Brajabashi and other heroes have been a constant source in kindling and rekindling the eternal flame of freedom in the minds of subsequent generations, she said.
After the fall of Manipur in the historic Khongjom War, Manipur was annexed to the British Empire on 27th April, 1891. The new masters could not forget the heroic fight of the valiant Manipuri soldiers and took all possible precautions to prevent further revolts. They could, however, hardly avert popular uprisings against the British Empire. Shortly thereafter, the Manipuri women hoisted the first flag of revolt against the alien rule in 1904, known popularly as the first Nupilal (First Women’s War), she continued.
Dr Najma Heptulla further said that Indian leaders and people issued an unequivocal call, asking the British rulers to quit India.  That clarion call has come to be known as the “Quit India” movement. The sheer determination and insistent strength behind that call led to the exit of the British colonialists and as a consequence, India attained Independence on August 15, 1947.
More than seven decades have since elapsed and today the country is poised to celebrate the 75 years of our hard-earned Independence.
It has become imperative to systematically highlight the contributions of the selfless and highly motivated freedom fighters to our new generations to make them realize with pride and humility that India's independence may have not become a reality had millions of patriots not made sacrifices.
It is crucial that the youngmen and women of today realize this aspect and pledge their commitment afresh to the unity and integrity of the country and also become crusaders in upholding and sustaining amity and brotherhood, she said.
Today, we are threatened by various fissiparous tendencies like communalism, regionalism, chauvinism and parochialism. These forces of destruction are trying their best to destabilize the Nation. The need of the hour is, therefore, to strengthen the spirit of patriotism which inspired our forefathers to fight selflessly to achieve independence and to maintain communal harmony, ensure justice, social as well as economic and thereby ensure unity and integrity of the country. There is no alternative to sincerely hard work, to make our great Nation strong and prosperous.
If we fail, posterity will not forgive us, she continued.
The programme was jointly organised by Dr BR Ambedkar University of Social Sciences (BRAUSS), Mhow and Heritage Society, Patna and attended by Dr Neeru Misra, Former Director, ICCR, New Delhi; Prof Asha Shukla, Vice-Chancellor, BRAUSS and Dr  Anantashutosh Dwivedi, Director General, Heritage Society.
Powered By Sangraha 9.0