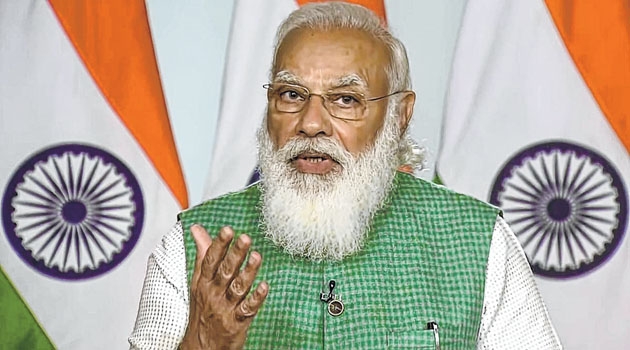 New Delhi
In a high-level meeting chair-ed to take stock of the Covid-19 situation in the country, Prime Minister Narendra Modi on Saturday took note of reports about ventilators lying unutilised in some States and directed that an immediate audit of installation and operation of ventilators provided by the Centre should be carried out.
Modi also stressed on the need of localised containment strategies in areas where the positivity rate is high.
“The Prime Minister added that refresher training for properly operating ventilators should be provided to healthcare workers if necessary,” an official statement read.
Modi also asked officials to formulate a distribution plan for ensuring oxygen supply in rural areas, including providing oxygen concentrators.
“The Prime Minister said that necessary training should be provided to health workers in the operation of such equipment, and power supply should be ensured for smooth operation of such medical devi- ces,” the statement added.
Modi also stated that testing needs to be ramped up in areas recording high positivity rate. “States should be encouraged to report their numbers transparently without any pressure of high numbers showing adversely on their efforts.
The PM asked for augmentation of healthcare resources in rural areas to focus on door-to-door testing and surveillance. He also spoke about empowering ASHA and Anganwadi workers with all necessary tools to help fight the pandemic,” the statement informed.
During the course of the meeting, the Prime Minister was informed that tests have gone up significantly across the country — from around 50 lakh tests per week in early March to around 1.3 crore tests per week now.
Regarding vaccination, the Prime Minister asked officials to work closely with the State Governments to speed-up inoculation drives across the country. The Indian Express