'Mucormycosis can spread through air' 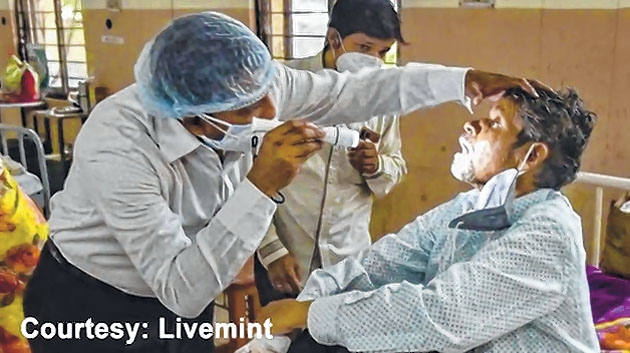 NEW DELHI, May 22
With many States witnessing a surge in mucormycosis or black fungus infections, AIIMS Professor and Head of Department of Endocrinology and Metabolism, Dr Nikhil Tandon on May 22 said that mucormycosis can spread through air but won’t cause any problem if person is healthy.
The doctor also said that mucor may enter into lungs but the chances are very low.
"Mucor can spread through the air. It won't cause any problem if a person is healthy. Mucor may enter into lungs but the chances are very low," ANI has quoted Dr Tandon.
The AIIMS doctor further said that the body can fight the fungus depending upon immunity.
"Our body is capable to fight it if the immunity is strong," he said.
A hospital in Ahmedabad, Gujarat has also reported first case of mucormycosis/black fungus in children, where a 15-year-old boy was diagnosed with mucormycosis after he was discharged post Covid. This is 1st case of paediatric mucormycosis in Ahmedabad, says ANI quoting Abhishek Bansal, paediatric doctor at a private hospital.
Meanwhile, on May 21, All India Institute of Medical Science (AIIMS), New Delhi Director Dr Randeep Guleria said judicious use of steroids and controlling blood sugar was a must to prevent black fungus disease or mucormycosis.
The black fungus disease, which affects the brain, lungs and sinuses, has emerged as the latest challenge for an already overwhelmed healthcare infrastructure.
Listing three important factors in the prevention of mucormycosis, Dr Guleria: “Three factors that are very important are— good control of blood sugar levels, regular monitoring of blood sugar levels in those on steroids and being cautious and judicious about the use of steroids.”
“Uncontrolled diabetes with COVID-19 can also predispose to the development of mucormycosis.”
Union Minister Sadananda Gowda said on May 22 that the total number of patients is around 8,848 across the country.
He has also announced an allocation of 23,680 additional  vials of Amphotericin-B for the treatment of the disease.
As per the allocation, Gujarat have been allocated 5,800 vials of Amphotericin-B. Maharashtra (5,090) have been allocated followed by Andhra Pradesh (2,310), Madhya Pradesh (1,830), Rajasthan (1,780), Karnataka (1,270).
Till now, Gujarat has reported maximum of 2,281 mucormycosis cases followed by Maharashtra (2,000), Andhra Pradesh (910), Madhya Pradesh (720) Rajasthan (700), Karnataka (5,00), Haryana (250), Delhi (197), Punjab (95), Chhattisgarh (87), Bihar (56), Tamil Nadu (40), Kerala (36), Jharkhand (27), Odisha (15), Goa (12) and Chandigarh (8).
Money Control