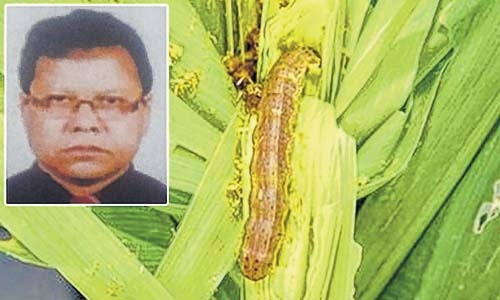 Konsam Samita
IMPHAL, May 24 : The Fall Armyworm, which first devastated maize (sweet corn) crops in the State in 2020 can be controlled and prevented if farmers have the right knowledge and tools, said Dr Khumukcham Ibohal Singh, Associate Professor and Head of Department of Entomology, College of Agriculture, Central Agricultural University (CAU) Iroishemba.
The Fall Armyworm is a species in the order Lepidoptera and is the larval life stage of a Fall Armyworm moth.
While the invasive insects entered India vastly in 2018, it reached Manipur in May 2019. The Fall Armyworm attacking hectares of crops were first reported from Karnataka.
Adult Fall Armyworms can fly about 100 kilometres in one night. Interestingly, they can fly upto 2000 kilometres in times of cyclones. A cyclone had aided the Fall Armyworm reach as far as Manipur in 2019, said Dr Ibohal.
The highly invasive species attack maize and other crops in swarms. In one night, they can destroy about 30 percent of a large maize plantation. They usually attack and target the soft shoots killing the whole plants.
Female Fall Armyworms lay eggs on the leaves (above and below the surface), shoots and on the base of the plant near the ground. In its lifetime, a female Fall Armyworm lays about 1500-2000 eggs. If these eggs are noticed, they should be removed and destroyed to control infestation, said Dr Ibohal.
While it has two biotypes--one that attacks maize and the other that attacks paddy, the latter is not common in Manipur, he added. There are many ways to control and avoid Fall Armyworm invasion.
Chemical insecticides
One way is spraying Emamectin Benzoide 5 SG (5 gm in 15 litres of water) before flowering or spray Comex/Barazide (Nuvaluron 5.25%+ Emamectin Benzoide 0.9%) 6.25 SC (30 ml in 15 litres water).
Farmers can also use Flubendiamide 39.35 SC (1.5 ml in 15 litres water) or Chlorantraniliprol 18.5 SC (4.5 ml in 15 litres water).
Organic control measures
After flowering begins and before cultivation, farmers should spray organic solutions, which are not harmful to the human health to prevent the Fall Armyworm.
Farmers can spray organic--Multineem (75 ml in 15 litres water) or Pestoneem (45 ml in 15 litres water) or  Green Racer or Green Pacer  (75 ml in 15 litres water). The Green Racer or Green Pacer can also kill termites (Leishou).
Farmers should not spray insecticides in the morning from 7 am to 12.30 pm, when the maize flowers are most active for pollination. If the insecticides are sprayed during the said period, it would affect pollination.  Insecticides should be sprayed on the whole of the plants in the evening after 4 pm, said Dr Ibohal.
It may be noted that the Green Racer and Green Lipel are organic insecticides produced by the Green Biotech Private Limited, Lamshang.
Pool technology
Farmers can also apply pool technology to control Fall Armyworms from attacking the maize. This technology involves planting nectar grasses, which the Fall Armyworms prefer near the maize cultivation. This technology minimises the insects' attack on the maize crops as they would instead attack and feed on the grasses, which can also be used as fodder for cattle. Chemical insecticides should not be used on the grasses as they would harm the cattle, he said.
Pheromone trap
Another way to control it is the application of pheromone traps. It is a type of insect trap that uses pheromones to lure male insects. As male insects are lured and trapped, the females would not be able to mate. This would then break their life cycle and cause their number to decrease significantly. This application proved very successful in trials conducted so far, said Dr Ibohal.
Fencing
Farmers can also fence the maize cultivation by planting Desmodium plants (Porongkhok) or marigold flowers. This will help keep the Fall Armyworms at bay.
Planting other crops, which the Fall Armyworms do not like in the midst of the maize plants is another way to counter the invasive insects. Farmers can plant cabbages, tomatoes, Arhar (Mairongbi), black gram (Sagolhawai) etc among the maize. A gap of 20 cm should be maintained between two maize plants, he said.
Other measures
The Fall Armyworms do not like sunlight and they are active at night time. During daytime, they remain in shades of grass around the field. Chlorpyriphos 20 EC (25-30 ml in 10 litres water) may be spread on the grasses around the field. This will help reduce the number of the insects attacking the maize crops significantly, he said.
Fertilizers also play an important role in controlling insects and they act as deterrents against the Fall Armyworm.
A Sangam requires 65 Kgs of Urea. Out of the 65 Kgs, 35 Kgs may be first used when planting the maize crops.
The remaining 30 Kgs may then be divided into two (15-15 Kg) and used when the maizes are knee high. 15 Kgs of the fertilizer can be mixed with 25 Kgs of sand.
Further, the Sangam of crops would require 95 kg Super and 17 Kg Potash. These should be used when tilling the land and during plantation.
(This article is written under the Media Fellowship Program in Scientific Journalism of the Public Relations and Media Management Cell, CAU Imphal. Dr Indira Thounaojam, Information & Publicity Officer, PRMM Cell can be contacted at [email protected] to know more about this article and related information).