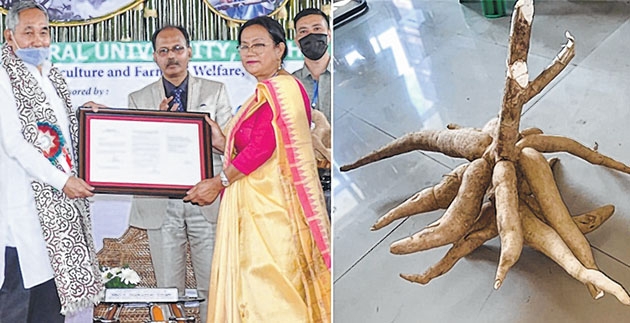 Konsam Samita
IMPHAL, May 2 : A ‘neglected crop’, cassava can be the alternative crop that may replace poppy in the hills of Manipur, said Professor and Head of Department of Horticulture, Central Agricultural University Imphal, Dr Akoijam Bijaya Devi.
Cassava is rich in nutrients and is a staple food in some developing countries. It is one of the main tuber crops found in Manipur and the soil in the hills are particularly suitable for this crop, she said.
She said CAU is taking up steps to promote cassava plantation among farmers in Manipur and provide them access to market.
While there are varieties of cassava, CAU’s U-Mangra-1 is gaining popularity among farmers in hill districts.
Dr Bijaya said U-Mangra-1 is different from regular cassava and they are big and tastier. Unlike regular cassava, the U-Mangra-1 are easy to plant and cultivate. They need little spacing when planted as the tubers are developed close to the plant and they yield higher than the regular cassavas.
One U-Mangra-1 tuber weighs about 6 kilograms and if it is cultivated after 2 years, it can weigh about 10 kilograms. This also yields more than the regular local cassavas, she added. This particular cassava was discovered during a research conducted in 2010 by a team which visited  the hill districts of Chandel, Tamenglong, Churachandpur and Kangpokpi etc.
While cassava has many usages and potential to earn farmers a great deal of income, lack of infrastructure and market is discouraging farmers from adopting this crop for large scale plantations.
Dr Bijaya said many products like flour, chips, waffles, spaghetti, noodles, pasta can be made from cassava.
Cassava has high resistance starch content. It is rich in carbohydrates and  its fibres help improve appetite. Due to high carbohydrate content, it is used to brew alcohol. Ceiling board can be made out of cassava and is a good feed for poultry, fishes, pigs.
It can also be used to produce biofuels. When there is required infrastructure and large scale plantation of cassava, it can be used as a main source of bio-fuel. While biofuels can also be produced from the biomass at Loktak Lake, they are limited and it takes years to form them, she said.
When right training on food processing is given and the required infrastructures are installed, farmers can be encouraged to adopt large scale cassava plantations. As the soil is also suitable, farmers in the hills can be encouraged to cultivate cassava and other tuber crops of importance. This may also solve the problem of poppy plantation/cultivation in the State, she said.
She added that CAU is organising awareness and training programmes on food processing (of cassava). Recently, a training programme was conducted at Laikoiching in Kangpokpi district, where farmers have adopted large scale cassava (U-Mangra-1) plantations.
About the discovery of U-Mangra-1
As part of All India Co-Ordinated Research Project on Tuber Crops (AICRPTC), Dr Bijaya represented  Manipur and presented a paper on tuber crops of Manipur in 2006 at Gujarat. After this, CAU Imphal was included as a ‘voluntary centre’.
Following this, various types of cassava and other tuber crops were brought at CAU Imphal and with the help of former Dean, College of Agriculture, Dr Iboton, she started plantation.
As Mangra, U-Mangra are neglected crops, farmers were not ready to cultivate them when approached, she said.
At first, cassava variety-Sri Bhadra was planted at Huikap area, then plantation was taken up at CAU’s research farm at Andro, she said.
Soon, CAU was made a Co-Ordinated Centre (AICRPTC) in 2009 and it started receiving funds for projects.
CAU then started a survey in the hill districts to study the local varieties of cassava and other tuber crops. The aim of the survey was to compare the local varieties with that of other States and study their yield.
This was when U-Mangra-1 was discovered from a farmer near Nungba area.
Dr Bijaya brought two tubers from the farmer and started cultivating it. As the tubers multiplied, in 2013, CAU sent a  letter to the Central Tuber Crops Research Institute, Kerala to promote the variety.
After this, an Initial Evaluation Trial (IET) of the crop was conducted for two years, followed by a 2-year Uniform Regional Trial (URT) and another 2-year Multi Locational Trial (MLT).
After completion of the trials, the U-Mangra-1 was promoted at the annual meeting of the All India Coordinated Research Project on Tuber Crops held at Kerala in 2019.
Large scale plantations started in 2020 and the U-Mangra-1 variety was showcased  at CAU’s Agri Fair held in March 2021.
While the varieties of cassava found in Jabalpur and Kerala produce higher yield, Dr Bijaya said U-Mangra-1 is tastier.
Cassava is usually planted before April rain and this crop takes about 10-11 months for cultivation.
It is planted on loose soil to help the tubers underground develop and grow with ease.
While a space of only about 75 cm x 75 cm is required when planting U-Mangra-1, regular cassava needs a space of at least 90cm x 90 cm between two plants, said Dr Bijaya.
Farmers at Laikoiching in Kangpokpi district have adopted large scale cassava plantation. The farmers in the area now prefer CAU’s U-Mangra-1 over the regular cassava. To further encourage the farmers and provide them market, CAU is planning to install processing units in the area, she said.
Interested farmers may approach the Horticulture Department of the CAU Imphal to know more about U-Mangra-1 and get planting materials, she added.
(This article is written under the Media Fellowship Program in Scientific Journalism of the Public Relations and Media Management Cell, CAU Imphal.
Dr Indira Thounaojam, Information & Publicity Officer, PRMM Cell can be contacted at [email protected] to know more about this article and related information)