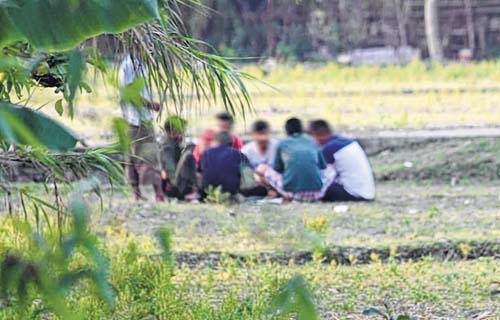 By Our Staff Reporter
IMPHAL, May 3: At a time when the whole of Greater Imphal has been declared a containment zone to break the spiralling chain of COVID-19 in the State, many people have found the lockdown-like situation quite convenient for gambling.
It has become a common sight in some localities of Imphal East district, particularly under the jurisdiction of Irilbung Police Station where many flout the norms and restrictions of containment zone and gamble together in paddy fields and spacious areas.
There were also reports of some irresponsible citizens setting up big gambling centres inside their houses in the same jurisdiction where many wealthy people from different places come and gamble.
As such, the containment measure taken up by the Government has not been complied with properly in many localities in Imphal East, thereby raising concern whether the declaration of containment zone in the said localities will actually contain or aggravate the pandemic.
With the irresponsible citizens openly committing such offence at a time when the State is witnessing a sudden spike in Covid infection and deaths, the efforts of the Police Department, Medical Department, civil bodies and all concerned in fighting the pandemic have been reduced to a farce in these localities.
The manifestation of irresponsibility from amongst the members of the public is not limited here. In parts of the Greater Imphal, shops and business establishments which are supposed to close by 10 am are usually opened in the afternoon and till late evening.
The most disdainful picture seen again in several parts of Greater Imphal area is the groups of teenagers and aged people walking in groups on the streets and flocking together in hotels.
On the other hand, police are having a hard time in cracking down on violators of the guidelines and restrictions issued by the State Government in connection with COVID-19 pandemic. Even today, the Police Department collected a substantial amount as fines for violation of guidelines, including for not wearing masks in public places and failure to maintain social distancing in public places.