Erabot to remain as MLA with some riders 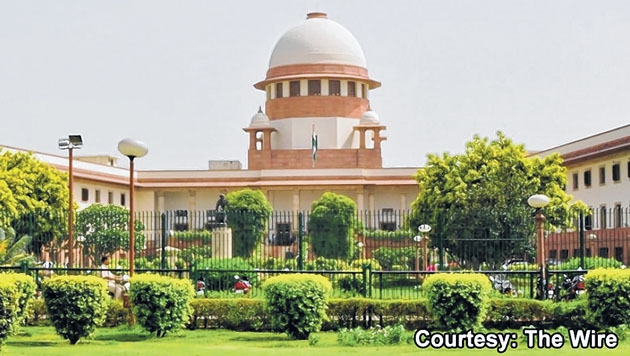 By Our Staff Reporter
IMPHAL, May 6 : The Supreme Court of India on Thursday fixed July last week for final hearing of a civil appeal filed by ex-Minister Okram Henry against MLA Yumkham Erabot and directed the latter to submit a counter affidavit before the Court.
A three member bench of the top Court comprising of Justice Uday Umesh Lalit, Justice Indira Banerjee and Justice Joseph, today heard the civil appeal filed by Okram Henry in connection with the High Court order which declared his 2017 election null and void and made Y Erabot duly elected representative from Wang-khei Assembly Constituency. Okram Henry filed the civil appeal on April 22 and it was registered on April 24.
The counsel of petitioner (O Henry) prayed the Court to admit the civil appeal and pass an interim order to stay the April 15 judgment order of the High Court of Manipur which elected Yumkham Erabot.
After hearing the submissions, the top Court admitted the civil appeal and passed an interim order mentioning that the respondent, Yumkham Erabot will remain as MLA of 15-Wangkhei Assembly Constituency, however he  can’t vote on the floor of the House and be part of any committee formed by the Government till the final judgment of the case.
The Court also directed Yumkham Erabot to submit a counter affidavit in connection with the case and fixed last week of July for final hearing of the case.  It may be noted that a week after the judgment order of High Court of Manipur, Yumkham Erabot was sworn in as a Member of the Manipur Legislative Assembly from Wangkhei Assembly Constituency on April 21 by Speaker Y Khemchand in the presence of Chief Minister N Biren Singh.