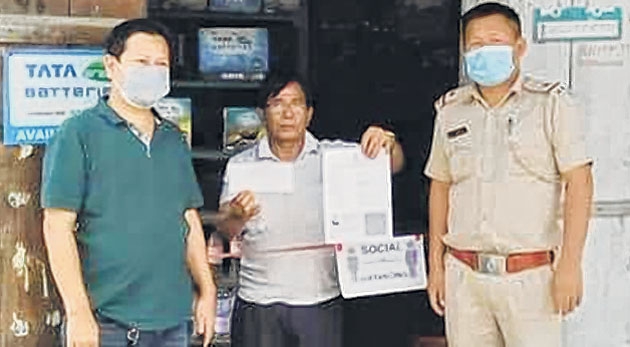 By Our Staff Reporter
IMPHAL, Jun 9 : With the State Government earlier stipulating that all those who have been allowed to open shop, such as pharmacies, should have negative Covid results with them, a team led by the Deputy Commissioner of Imphal West, Th Kirankumar conducted  a verification drive covering pharmacies, petrol pumps and other business establishments at Imphal today.
Speaking to The Sangai Express the DC said that today's drive was conducted at different locations viz  Mayang Imphal, Wangoi, Hiyangthang, Singjamei, Patsoi, Malom, Kwakeithel, Canchipur, Thangal Bazar and Paona Bazar.
The DC also contended that the majority of vendors working at chemist shops, grocery shops, automobile workshops and petrol pumps across the said places were found to be working without Covid negative certificates.
Local shops with staff without Covid test certificates were ordered to shut while other establishments with fewer staff having test certificates were warned not to get fully tested at the nearest testing centres.
The DC also stated that many of the chemist shops were found to be closed as a mark of respect to former president of Manipur Chemists and Druggists Associa- tion, Ningthoujam Ibochou- ba who died due to Covid recently. Petrol pumps, which did not get the order to undergo mandatory testing, were however allowed to remain open but were instructed to undergo Covid tests without fail, he said.
Saying that the drive is being carried out for the safety of all, the DC also urged all to cooperate with the initiative.
199 detained : The State police on Wednesday detained 199 (one hundred and ninety nine) individuals for violating the Covid restrictions issued by the State Government and the State Disaster Management Authority and collected Rs 72,100 (Rs Seventy two thousand one hundred) as fines. According to police, the cumulative number of people detained so far stands at 1,45,236 (One lakh, forty five thousand, two hundred and thirty six) individuals while the fine collected is 2,20,92,160 (Rs two crore, twenty lakh, ninety two thousand, one hundred and sixty).