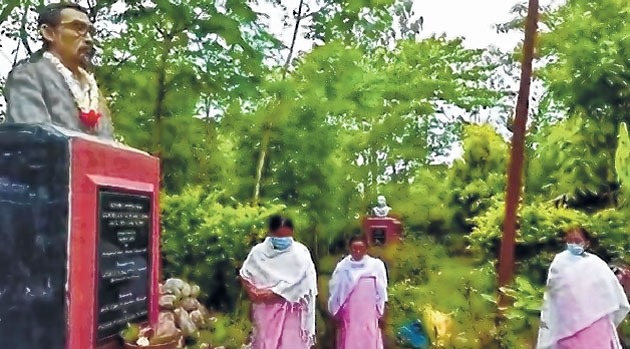 By Our Staff Reporter
IMPHAL, Jun 10 : The Patriotic Writers Forum Manipur in association with its Assam and Tripura units observed  the 21st death anniversary of Arambam Samarendra, a noted playwright and lyricist of Manipur, in a low key manner today.
The main observance was held at Nungshikol Park in Lamlai AC, where  a group of people led by OC Meira and Chana Lembi, founder secretary and senior member of the forum offered tributes to the bust of Samarendra.
On the occasion, PAWF secretary Rakesh Naorem said that June 10 is  a black day for the artistes, especially writers and aesthetes as Samarendra was instrumental in promoting shumang leela, and other art forms of Manipur.
Samarendra died on June 10, 2010 while addressing a seminar on  'Women's Shumang Leela in Manipur' at Khurai Nandeibam Leikai.
He was also a renowned scholar and cultural activist.
The objective of observing this day every year is to propagate his ideology and  vision to a younger generation, Rakesh added.
OC Meira also spoke at the event.
He said that Samarendra was an exceptional individual who contributed much for the development of shumang leela, Manipuri film and  theatre.
The first Manipur film 'Matamgi Manipur' is an adaptation of the theatrical  play "Tirtha Jatra" written by Samarendra, OC Meira said and added that Samarendra was conferred Sahitya Akademi Award for his book 'Leipaklei' in 1995.
PAWF president Naoroibam Khamba Luwang said that Samarendra was a remarkable artiste and a man of different facets who dreamt of a new Manipur .
A poetry recitation programme in honour of the famed writer was also broadcast on a Youtube channel Manipur Life Live.
Jiri Development Organisation (JDO), Jiri Ima Meira Paibi Apunba Lup (JIMPAL); All Manipuri Students' Union (AMSU); Coalition Against Drugs and Alcohol (CADA) and PPANL also observed the anniversary at the JDO's conference hall in adherence to the SOPs for COVID-19.
Members of the Arambam Samarendra Charitable Trust and Social Standard Club (SSC) also offered floral tributes to the statue of Samarendra at Khurai Nandeibam Leikai.