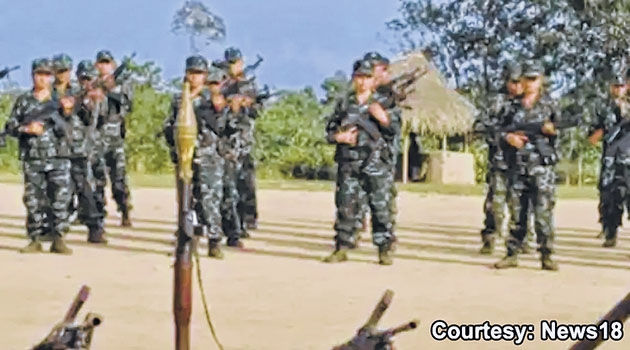 NEW DELHI, Jun 19
Amidst continued questions over the Naga peace talks, the Central Government has claimed that the NSCN (IM), a Naga Nationalist separatist group operating mainly in North East India, is headed for a split. The Government has also accused NSCN (IM) of indulging in rampant corruption leading to disillusionment in its rank and file.
The outfit has trashed the claim.
Quoting sources within the NSCN (IM), the Centre said that several senior functionaries of the Naga group were defecting to the rival underground factions led by Khango Konyak and Niki Sumi. These disgruntled senior functionaries who hailed from tribes of Nagaland were in touch with rival factions and would cross the fence at an ‘appropriate time’.
“Disillusioned with the leadership, 11 civil functionaries of the outfit from its unit operating in Niuland area of Dimapur defected to join the Khango faction in the second week of June. Earlier this year, several cadres of the NSCN (IM) had shifted allegiance to the Niki Sumi-led faction," the Government officials claimed.
The outfit has, however, rubbished the claims. A senior NSCN functionary said that the Government was misinformed when asked about the predicted split in the ranks of the outfit. “The government is misinformed perhaps. NSCN is intact,” the senior leader said.
The Government has also accused NSCN (IM) of corruption. Agencies accused the Naga group of seeking cuts in welfare schemes like the one under the National Food Security Act and also Covid-19 welfare funds.
“The greed of the NSCN (IM) leadership for money has been insatiable and blinded by the same; they are not even sparing funds meant for the welfare of its cadres and the people it claims to represent," officials said.
The basis of the claim seemed to be a report on the Regional news channel North East live. The report quoted K Tokugha Sukhalu, Advisor School Education, Nagaland who alleged that NSCN factions are seeking a share of Covid-19 fund meant for battling the pandemic in the Zunheboto district of Nagaland. Sukhalu in the report claimed that he was informed of 7-8 NSCN factions in the district seeking Covid-19 funds from the Nagaland Government.
The report and the allegations were labelled baseless by NSCN (IM). A press statement by the group said, “This is to clarify that NSCN/GPRN has nothing to do with the news report of North East Live wherein NSCN’s name was mentioned that it is seeking a share of Covid funds. The statement added that NSCN was “in total solidarity with the State Government’s fight against the wicked Covid-19.
“We are, therefore, not involved in any manner that goes against humanity at this particular juncture where all Nagas, irrespective of social/political standing are expected to fight together," NSCN said.
Government however said there are multiple allegations of corruption against the Naga group. Officials claimed that the outfit has faced a lot of backlash in Ukhrul after it started demanding a 5 per cent cut from the rice being supplied under the National Food Security Act (NFSA) and a whopping 10 per cent cut from the rice allotted under welfare schemes of the Government, meant to help the needy during Covid-19 pandemic. “Despite large sums of money raised through rampant taxation, the cadres on the ground are finding it difficult to meet even their basic requirements with the meager stipends being paid on and off," officials said.
Accusing Thuingaleng Muivah, NSCN’s general secretary, of losing touch with the real demands of people, the Government officials said one of the reasons for large-scale defections from NSCN (IM) is his tight control over the outfit. “Despite having Q Tuccu as its chairman, the harsh reality within the outfit is that he remains a titular head while the concentration of power remains in the hands of Muivah, the all-powerful general secretary of the outfit. Tangkhul hegemony within the NSCN (IM) remains another reason for disgruntlement," Central agencies claimed. Officials added that the cadre of NSCN was disgruntled since they face financial crisis while senior leaders, especially those from the Tangkhul tribe lead a lavish life, constructing mansions in Dimapur and moving around in high-end vehicles.
Claiming a push back from the ground now, officials in the Center said Tangkhul Naga Long/TNL, the apex body of the Tangkhuls, which is more or less a mouthpiece of the NSCN/IM, faced a challenge in its pocket-borough of Ukhrul, when Hunphun Village Authorities/HVA (Ukhrul) vandalized the TNL office on April 16. “This had happened after the NSCN/IM had ruled in favour of the TNL in its dispute with the HVA. Such an event challenging the authority of NSCN/IM was unheard of earlier," officials said.
Quoting another incident, Central agencies said Muivah tried to force his decision on the Church bodies in Ukhrul district of Manipur but faced a lot of resistance, forcing him to backtrack.
The Naga peace talks have been rocked by uncertainty in the last few months. Naga accord which was hailed as a masterstroke at the start of the Modi regime has been hanging in the air with clear discord between Muivah and RN Ravi, Center’s interlocutor on the issue.
CNN News 18