Athletes from NE India who have made it for Tokyo Olympics 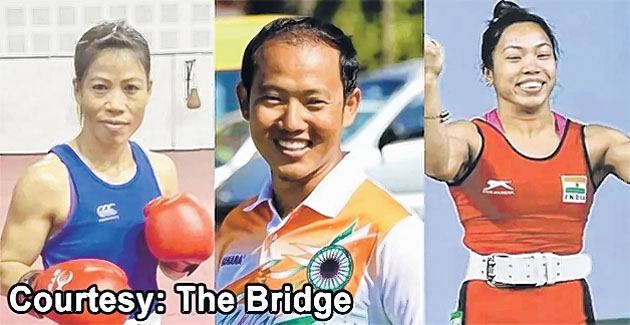 NEW DELHI, Jun 22
A brief look at all the athletes from States in North East India who have made the cut for Tokyo in various sports Mary Kom, Tarundeep Rai and Mirabai Chanu By C.C. Chengappa Updated: 22 Jun 2021 1:04 PM
From Judo to Boxing and Archery to Hockey, several Indian athletes hailing from States in North East India will be representing India at the upcoming 2020 Tokyo Olympics. Here is a brief look at their individual profiles.
1) Tarundeep Rai (Archery) : The Indian men's archery team are serious medal contenders this year and this is bolstered with the presence of Tarundeep Rai. He hails from Namchi in Sikkim and first took part in the Olympics back in 2004. He has an immense amount of experience with several World Championship and Asian Games medals under his belt.
2) Lovlina Borgohain (Boxing) : The welterweight boxer hails from Golaghat district of Assam and at the age of 23 will be competing in her first Olympic Games. She has won bronze medals at the 2018 and 2019 AIBA Boxing Championships as well as the Asian Championships. She has also made the notable feat of being the first woman from Assam to have qualified for the Olympics.
3) MC Mary Kom (Boxing) : Mary Kom needs no introduction. The six-time World Champion will be vying for another Olympic Medal at Tokyo this year. She has previously won bronze at the London Olympics and will be looking to better that in what will definitely be her final appearance at the Olympic Games. She hails from Churachandpur district in Manipur.
4) Lalremsiami (Hockey) : Her name has been plastered all over the news and rightly so for the 21-year-old will be the first person from her State to represent India at the Olympics. She hails from the town of Kolasib located north of Aizawl in Mizoram. She made her way up through the ranks of the Under 18 National team before being selected for the National side at the age of 17. She has previously represented India at the Asia Cup, Asian Champions Trophy and was selected at the age of 18 to play at the World Cup in 2018.
5) Sushila Likmabam (Judo) : The 5th Olympian from the State of Manipur is Indian judoka Sushila. She competes in the 48kg weight class and has previously won silver at the Glasgow Commonwealth Games. She provisionally qualified for the Olympics by claiming a continental quota place a few weeks back. This was based on her position on the Asian list of Judoka with Asian having 10 slots and Sushila attaining rank 7.
6) Shanglakpam Nilakanta (Hockey) : Another Hockey star from Manipur to have established himself in the team over the years. The midfielder hails from the Imphal East district and first made his National debut back in 2014 for the junior team at the Sultan of Johor Hockey cup. He was selected for the 2016 men's Junior Hockey World Cup team that went on to be the victors of the tournament.
7) Saikhom Mirabai Chanu (Weightlifting) : Heavily touted to win a medal this year, the 26 year-old weightlifting star hails from Imphal East district in Manipur. She won a Gold Medal at the Commonwealth Games in 2018, silver at Glasgow in 2014 and Gold at the World Championships in 2017. All of these were in the 48 kg category that she competes in. She has been awarded the Padma Shri and Rajiv Gandhi Khel Ratna Award for her performances in the National and International weightlifting forums.
8) Sushila Chanu (Hockey) : The former Indian women's team captain is also heading to Tokyo this year. Her selection is undoubtedly crucial as she is one of the most experienced members of the squad. She is a half back and has captained the team to a bronze medal at the Junior Women's Hockey World Cup in 2013. Sushila Chanu hails from Imphal in Manipur.         thebridge.in