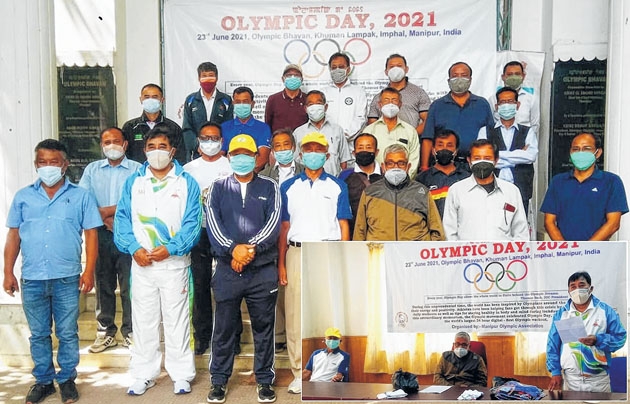 By Our Sports Reporter
IMPHAL, Jun 23 : The Manipur Olympic Association has today celebrated 'International Olympic Day' with a simple function at its office.
The programme organised with strict adherence to Covid SOP was attended by association's senior vice president, Dr GA Ibopishak Sharma, senior vice president Konsam Baruni and secretary, Sunil Elangbam as presidium members.
Formation of International Olympic Committee, inception of modern day Olympics and its popularization with the growing number of IOC members over the years were recalled during the programme. It may be noted that Manipur Olympic Association started observing the day 3 years before organising 1999-National Games in the State and it has been more widely celebrated from 2002 onwards.
Speaking at the occasion, MOA secretary Sunil Elangbam expressed regret that the day can not be celebrated widely due to COVID-19. Other programmes such as Olympic run and other sporting activities have been curtailed this year due to the pandemic, he said. MOA's senior vice president, Dr GA Ibopishak Sharma also lauded sports associations for their continuous support.
He also drew the Government's attention to reduce the grievances of the player while seeking concession and other provisions at the occasion.
GA Ibopishak also expressed pride over State players who sealed their places in Indian Olympics contingent and urged all State associations to groom more players who can boost State's image in the National Games.
Manipur Hockey too observe International Olympic Day at four venues
Manipur Hockey today celebrated the International Olympic Day at various venues in commemoration of the birth of modern Olympics.
The modern Olympics was born on June 23, 1894 with the formation of the International Olympic Committee in Paris before the first Olympic Games was held in Athens in 1896, recalled Manipur Hockey in a press statement.
The day was celebrated across four different venues in the State. The main function was celebrated at Khongman Students Club in the presence of Hockey India president Gyanendro Ningombam; Manipur Hockey president, Basudev Singh; Manipur Hockey general secretary, Seram Neken and other officials of Manipur Hockey and Khongman Students Club, the release said.
Similar celebratory programmes were also organised in Jiribam by All Jiribam Sports Association and Hockey Units in Imphal West and Bishnupur under the aegis of Manipur Hockey and with participation of sports lovers, the release said.
Seram Neken on behalf of Manipur Hockey had also greeted sportspersons and sports lovers on the occasion and appealed to all to strive to promote good health and sporting spirit among the State youths, the release added.