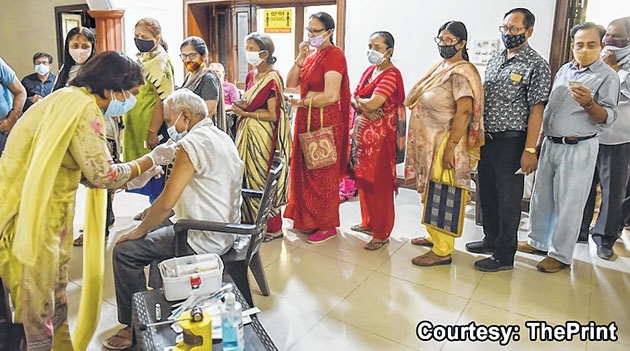 New Delhi, Jun 5
Older adults may need a third vaccine shot in countries where B.1.617.2—the ‘Delta’ Covid variant first identified in India—is prevalent, according to a team of scientists who published their findings in The Lancet journal.
The team from the UK suggests that B.1.617.2 possibly brings a dual challenge of reduced vaccine efficacy as well as increased transmission.
The team, that only studied efficacy of Pfizer’s mRNA vaccine (BNT162b2), said the vaccine was sufficiently effective in protecting against severe disease in people who were infected with the Delta variant, the antibody levels generated in vaccinated people’s blood samples were low when tested against this variant as compared to others.
Their research also showed that although a single dose of the vaccine may still afford considerably more protection than no vaccination, single-dose recipients are likely to be less protected against the three SARS-CoV-2 variants of concern, namely B.1.617.2, B.1.351 (first identified in South Africa) and B.1.1.7 (first identified in the UK).
The researchers also warn that increased age was also associated with lower antibody activity against B.1.617.2 and B.1.351. This, the researchers suggest, means that older populations in countries where these strains are prevalent may need further booster shots of the vaccine.
Ideally, these booster shots should be with modified vaccines that better protect against emerging variants of concern, they said.
The study, however, did not look at the efficacy of other vaccines.
Interval between doses a factor too
The increased interval between the two doses of the vaccine also reduced antibody activity, the researchers said.
To ensure that the maximum percentage of the population quickly gets at least one shot of the Covid vaccine, the UK has extended the interval between the two Pfizer vaccine doses.
“Although this might have had a limited impact of protection against parental SARS-CoV-2 strains or the B.1.1.7 variant, the potential impact on protection from other variants of concern is poorly understood,” the researchers said.
The findings add to a growing body of research that indicates that vaccination strategies need to evolve as new variants of the SARS-CoV-2 variants emerge.
The first sample of B.1.617.2 was isolated in December last year. The strain largely drove the devastating second wave of Covid cases in India, accounting for as much as 75 per cent of genome sequences from India.
A recent study by researchers of the the Indian SARS-CoV-2 Genomics Consortium (INSACOG), which is yet to be peer reviewed, also suggests that breakthrough infections—infections in people who have been vaccinated—are disproportionately due to the Delta variant.
The study suggests that this variant likely has the ability to evade the immune system.  The Print