Makru Bridge may be inaugurated this month 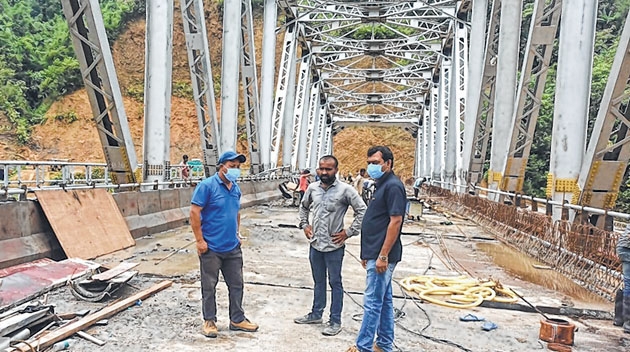 By Our Staff Reporter
IMPHAL, Jun 6 : With the construction work of Makru Bridge, one of the key bridges of Imphal-Jiribam highway (NH 37), almost completed, Chief Minister N Biren may inaugurate the bridge within the current month.
Barak Bridge, another key bridge of the highway, is being constructed at the moment while plans are afoot to construct a new Irang Bridge.
Sources informed that construction of Makru Bridge can be said to be fully complete.
The construction work has been progressing at such a speed that the bridge is fit for inauguration within the current month. Once the Makru Bridge is inaugurated, construction of Barak Bridge can be expedited remarkably, said the sources.
Notably, construction of new Barak and Makru bridges started in May 2017 after Chief Minister N Biren laid foundation stones for the two bridges.
The construction works were supposed to be completed by April 2019 but the completion target was extended allegedly due to several disturbances including abduction of engineers and labourers from the work sites by anti-social elements.
Nonetheless, following instructions from the State Government to complete the bridge construction works as soon as possible which also deployed adequate strength of security forces at the work sites, Makru Bridge is now almost complete, according to the sources.
Both Makru and Barak bridges are double-lane bridges and they are respectively 124 metres and 154 metres in length.
On the other hand, construction of Sawombung Bridge on Imphal-Ukhrul-Jessami highway (NH 150)  started after the foundation stone was laid on June 3, 2015.
The estimated cost of the bridge construction work which was supposed to be completed within two years was Rs 14.14 crore. The cost was sanctioned by the Ministry of Road Transport and Highways during the fiscal year 2012-13.
After the due tender process was held three times, the work order for construction of Sawombung Bridge was awarded to Kolkata based Supreme Infrastructures Private Limited. The work order amount was Rs 12.7 crore.
As the bridge construction work was delayed for a protracted period, the Ministry of Road Transport and Highways even asked the State Government to cancel the work order issued earlier and  issue a fresh one, informed the sources.
Construction of Lokchao Bridge on Imphal-Moreh highway (NH 102) was going on at a commendable speed but it has now come to a grinding halt.
The new Lokchao Bridge was sanctioned by the Ministry of Road Transport and Highways in 2017.
As no contractor came forward, tender for construction of Lokchao Bridge was held seven times before the work order was issued in November 2017.
Even though the whole responsibility for construction and maintenance of Imphal-Moreh highway has been taken over by NHIDCL, PWD is still in charge of constructing the Lokchao Bridge. However, the bridge construction work has come to a complete halt due to certain disturbances/prohibitions, the sources added.