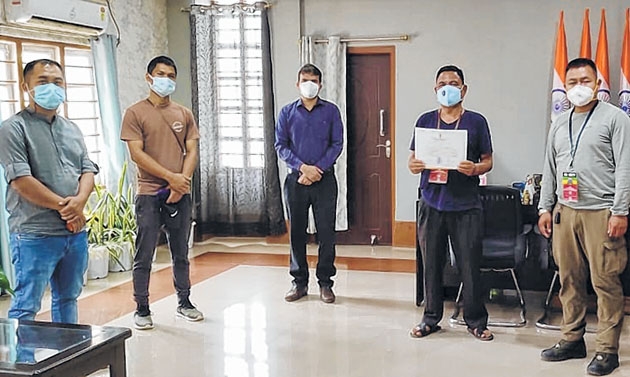 Our Correspondent
CCpur, Jun 6 : As the augmented mass testing drive in Churachandpur continued for the second consecutive day till yesterday, the daily spike saw a dramatic increase with 188 new cases added in the past two days.
On Saturday, results of 707 samples tested using RAT in a 24-hour period showed 82 persons positive. Another 53 persons tested positive in RT-PCR taking the tally to 135, the highest daily figure so far. But the test positivity rate (TPR) for RAT remained a notch below Saturday’s 12.5%. The RT-PCR positivity rate could not be calculated as the results of the samples sent at Imphal for the test were not received till the time of filing this report.
Today, 53 persons tested positive (43 through RAT and another 10 through RT-PCR) against the RAT sample of 691. The RT-PCR samples tested were again not known. This effectively takes the test positivity rate for RAT to 6.2%, much below the Saturday mark.
During the augmented test drive conducted on Friday and Saturday, a total of 1143 persons from 21 hot spot areas were tested in at least 11 test centres with 53 results returning positive. The test positivity rate (TPR) for the mass testing for the past two days now stands at 4.8%, while the overall TPR hovers two notches above.
The Medical Department has planned an aggressive mass testing in between June 4 and June 7 covering over 55 villages identified as hot spots. About 4000 samples were planned to be tested during the exercise.
Today, as the mass testing drive entered its third consecutive day, initial reports hinted the TRPs to be comparable with other testing sites. The results however were not included in today’s IDSP 24 hours report as the report was based on 3 pm each day.
While results for the mass testing in some areas are commendable others fare much worse than expected, as closer analysis of the two day results show an alarming test positivity rate (TPR) of more than 10% in some localities.
The village of Pearsonmun made a commendable turnaround from being a hotspot in the initial days to zero TPR during the mass testing at the village. All 162 persons tested in the village on Friday tested negative. The Village Covid-19 Task was immediately commended by the district administration with a cash reward of 5000 which was handed over to them by the Deputy Commissioner yesterday.
The district currently has 750 active cases, and those requiring oxygen assistance at the district hospital stood at 31 against the available beds of 48. Another 67 persons have recovered in the past 24 hours.
Churachandpur has 78 fatalities.