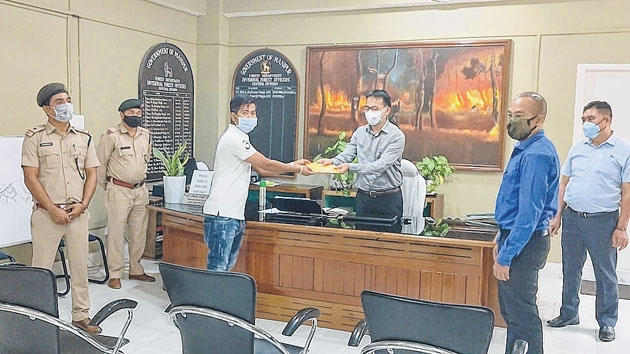 Our Staff Reporter
IMPHAL, Jun 7: The sighting of stray 'Slow Loris' locally known as Yong Ekhaithibi is increasing in the past few days.
Four such cases have been reported where Slow Loris were found in human habitation areas last week and were handed over to Forest Officials. The officials after checking the health condition of the animals and depending on their condition were either released in the wild or kept in the Animal Care Unit of the Manipur Zoological Garden at Iroisemba.
One such incident came to light on June 6 when Chief Minister N Biren Singh came to know about a Slow Loris being taken care by Chingkham Sundar Singh, s/o Chingkham Nongyai Singh of Yairipok Top Chintha who found the animal on the road side in the evening of  June 4 in an inactive state.
He took the animal home and extended great care which helped in the speedy recovery of the animal and not knowing whom to hand over the animal, he used his social media account and sought the attention of the authorities concerned.
It was from this platform that the Chief Minister took cognizance and directed the forest officials of the area concerned to collect the animal and as per the directives, the forest officials shifted the Slow Loris to the Animal Health Facility at the Manipur Zoological Garden at Iroisemba and is currently under observation.
Acknowledging the commendable act of Chingkham Sundar during the Covid pandemic, N Biren Singh presented him with a cash award of Rs 5000 through the Divisional Forest Officer, Central Forest Division of Mantripukhri and also to encourage other youths in the State to develop a sense of love and care for wildlife, forests and natural surroundings.