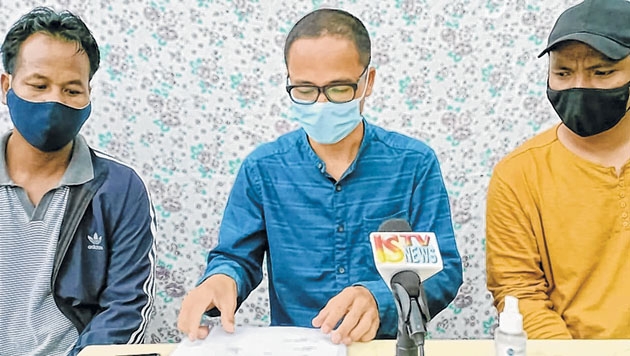 Our Correspondent
KANGPOKPI, Jun 7 : Reiterating its strong opposition to the notification for land acquisition to widen NH-2 between Gamgiphai and Taphou Kuki in Kangpokpi District, the Asian Highway Land Affected Villages Chairmen/Chief's Association(Gamgiphai-Taphou Kuki) has urged the Chief Minister who is also the Revenue Minister to accommodate the sentiments of the landowners before taking any decision.
Speaking to media persons at Kangpokpi this afternoon, Dr. Lamminthang Haokip, spokesperson of the association said that the proposal of the Ministry of Road Transport and Highways,  to acquire land for widening the road stretch is disturbing.
To bring amicable solution and decisions have been placed to all the authority concerned time and again by the affected landowners and various stakeholders within Kangpokpi district.
However, taking due advantages of procedural errors/lapses on land demarcation and registration, the district administration and the Revenue Department have been issuing orders and notifications snubbing the stakeholders (the real landowners), he added.
Some points were placed before the Government by the said Association to ensure justice to all the affected and rightful landowners and avert public unrest.
Firstly, why should the State Government and Revenue Department in particular disregard the  memorandum signed between the affected villages and DC/LA of Kangpokpi district on January 4, 2021 and the subsequent representations by various civil societies and  stakeholders ?, asked the Association and further asked why should the authority overrule all the objections submitted under sub-section (1) of Section 3C of the National Highways Act, 1956 by the affected landowners ?
Secondly, what is the intention for non-inclusion of more than of 70% rightful landowners in the  recent notification for land acquisition by the Ministry of Road Transport and Highways,  dated 28th May, 2021 and the subsequent re-publication of the same by Deputy Collector  (LA)/DC, Kangpokpi district, dated 31st May, 2021 even after submission of objections to the earlier 3A land acquisition notification, dated 15th April, 2021 and, the subsequent notice to concerned authority to halt all the works henceforth by the rightful landowner’s association, dated 10th May, 2021.
Thirdly, why should the DC Kangpokpi direct the land owner’s association to meet one local BJP  MLA who does not have any right over others’ land and, what is the intention of including the land owners alone who are inclined towards one incumbent local MLA and also why and how all the land listed for acquisition are registered as Government land when most of the land belong to the locals who have every legal documents.
Fourthly, what is the intention of the Government in treating the land owners of the same district  differently (the stretch of land from Changoubung-T.Khullen village to Taphou-Kuki as  unsurveyed land, while the stretch from Kangpokpi to Gamgiphai are not treated the same).
Is the Government trying to gain political mileage out of this or, is this an act of political vendetta by the Revenue Minister towards his political opponents within and outside his party affiliation, he asked.
The Government must put on hold all land acquisition process unless the same is revoked and rectified or an amicable solution is arrived at with the rightful land owners at the earliest, he added.
He also urged the Chief Minister to accommodate the sentiments of the rightful landowners before taking any decision and added that any decision without accommodating the sentiment of the rightful landowners will not be accepted.
Meanwhile, the Kuki Inpi Kangpokpi district said that in spite of the Manipur State Government order No.3/1/Misc/2008-Com(Rev) dated 15th June 2013 to transfer all land records to the respective district, the same is yet to be implemented which has caused great inconveniences to the district administration of Sadar Hills Autonomous District Council on matters regarding all land and development related activities.
It continued that Kuki Inpi Kangpokpi and the district level CSOs had repeatedly been appealing to the Government but to no avail.
It said that for reasons mentioned above, it has been decided that until all land records of Kangpokpi district within the jurisdiction of Sadar Hills Autonomous District Council are transferred to Kangpokpi, there will be no land related activities on ground or paper conducted from June 8, 2021 and subsequently all future Government notifications/orders related to Kangpokpi district especially land related will not be endorsed/upheld.
"This includes all Asian Highway expansion related works and procedures/orders/notifications", it added.
Kuki Inpi further said that all Government/Company/private contractors and sub-contractors are advised to abstain from all land related activities as they will solely be responsible for any misfortune and the State Government will be blamed for the same.
It also entrusted KSO Sadar Hills and its sister organizations to oversee the implementation to its decision.
Meanwhile, Saitu MLA Ngamthang Haokip, who is also the Advisor to CM had written to the CM that that the people are not against the expansion of the road but proper agreement is required.
He also urged the CM to initiate urgent meeting with the representatives of the stake-holders in public interest.
Kangpokpi AC MLA Nemcha Kipgen also wrote to the Chief Minister over the issue stating that proper verification of the land has still not been done.