Koukha cultivation set to get a fillip with new tech 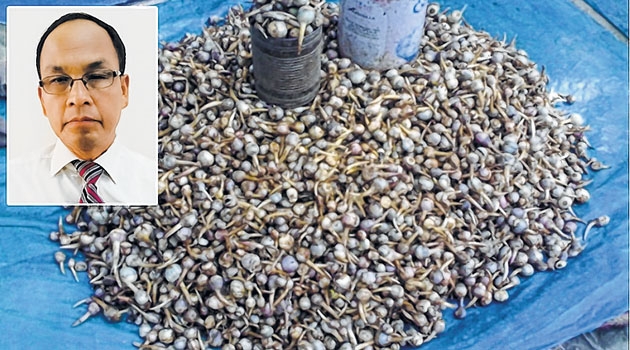 Konsam Samita
IMPHAL, Jun 8 : Prof Leitam Nabachandra of Department of Agronomy, Central Agriculture University Imphal has stated that farmers can now earn substantial income by growing arrowhead (Koukha) plants in fields that are not fit for paddy cultivation.
Prof L Nabachandra is a developer of technology "Scientific cultivation of arrowhead (Sagittaria sagittifolia)" - an unexplored potential marshy land crop of Manipur.
He continued that the supply of this plant variety, which once grew abundantly in Manipur is falling as farmers are unaware of growing it properly.
The short supply of the said plant is one major factor for its galloping price, he added.
Speaking about the technology he has developed, Nabachandra said that the research work for the scientific cultivation of arrowhead was carried out at CAU, Imphal and the same was incorporated in the technological inventory of the university in 2019.
Many of the farmers are doubtful of growing arrowhead for commercial purposes as it is not practised widely in the State. However, some farmers get good results on cultivating this plant variety on a piece of their land using the method he devised on a trial mode, he added.
Saying that growing arrowheads can earn 4 times more profit than paddy when the size of the field is equivalent, Nabachandra exuded confidence that many farmers will start growing arrowheads in marshy land shortly.
He further stated that arrowheads can be planted in three methods - direct seeding/sowing, transplanting, and intercropping with paddy.
If one wishes to grow arrowhead directly like paddy, then it is advisable for the person to mix the plant seeds with soil or similar particles at the time of sowing as arrowhead seeds are papery and easily scattered, he said and added that 1 kilogram of arrowhead seeds is ideal for growing in 1 sangam of field.
For transplanting, half a kilogram of seeds is sufficient as a gap of 10 cm should be maintained between two plants, Nabachandra said and apprised that half a kilogram of seeds can easily generate about 1,000 kg of arrowhead on a good harvest.
If intercropping is the option, then the person has to plant the arrowhead 10-15 days after the paddies are planted in between the stalks, he maintained and said that farmers can earn more income through intercropping.
However, farmers fear that this method of intercropping could kill the paddies, he said and reiterated that arrowheads should be transplanted when the paddies are well established.
Prof Nabachandra also said that growing paddies and arrowheads are similar and the fertilizer for paddies can also be used for arrowheads.
For growing arrowhead alone on 1 sangam of land, urea (20kg), super (50kg), and potash (15 kg) are recommended for a good harvest, he continued and added that grasses or weeds should be removed before the fertilizer is put.
He stated that using insecticide should be avoided at all costs in a field where arrowheads are grown.
Saying that arrowhead is a Kharif crop and its ideal time of growing is the same as paddies, he added that arrowhead can be harvested after about 150-180 days of the plantation.
Its leaf will become dry, reddish, and wrinkly when it reaches the harvesting stage, he said and added that, unlike paddies, arrowhead can be harvested periodically till up to February.
Saying that the arrowheads have rich medicinal value, he added that the leaf and the tuber of this plant are used in the treatment of skin disease, sore throat, digestive problems, etc. Arrowhead tubers are also popular food items among the Manipuris for their unique taste, he said.
Saying that he developed the technology to make the farmers understand that arrowhead plants can be grown for commercial purposes in a field that is not apt for rice plantation and to save this plant breed from extinction, Nabachandra appealed to all to consider planting arrowheads.
Nabachandra also said that he is available for suggestions on planting arrowheads and interested farmers can also contact him for seeds.
Meanwhile, one Ngangom Rajen from Uyumpok Nongshum Village who is successfully growing arrowhead plants for the last 5-6 years said that the price of arrowhead tubers has jumped more than double since he started growing the plant.
A few years back, a can of arrowhead tuber cost about Rs 50, but the price has jumped more than double now, Rajen informed.
Stating that he made a profit of about Rs 80,000 on planting arrowhead plants on 1 sangam of land on a good harvest, Rajen maintained that June is the ideal month for planting arrowheads.
He also said that arrowheads are easy to sell due to their high demand in the market.
(This article is written under the Media Fellowship Program in Scientific Journalism of the Public Relations and Media Management Cell, CAU Imphal. Dr Indira Thounaojam, Information & Publicity Officer, PRMM Cell can be contacted at [email protected] to know more about this article and related information).