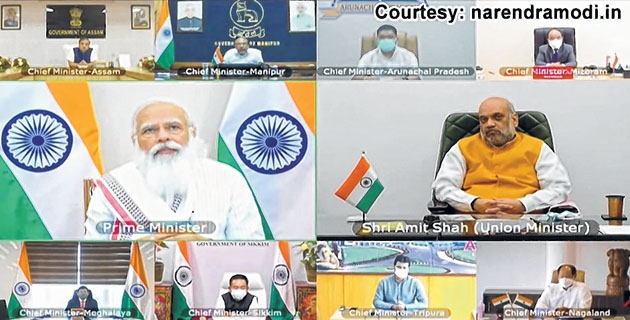 NEW DELHI/GUWAHATI, Jul 13
Prime Minister Narendra Modi on Tuesday urged the Chief Ministers of eight North Eastern States to ramp up vaccination rates, set up temporary hospitals and form micro containment zones with aggressive cluster testing and tracking to control the COVID-19 situation.
Mr Modi addressed the Chief Ministers of Assam, Arunachal Pradesh, Sikkim, Tripura, Meghalaya, Nagaland, Mizoram and Manipur via video conferencing, as according to the Union Health Ministry, 80% of cases were from 90 districts, of which 14 were in the North-East. It was also the first such interaction where new Health Minister Mansukhbhai Mandaviya was present.
All the Chief Ministers of NE States including Chief Minister N Biren Singh presented the overall preparedness and steps taken up by the State Government towards tackling the COVID-19 pandemic.
N Biren Singh expressed his gratitude to the Prime Minister Narendra Modi, Union Home Minister Amit Shah and others for their priceless support and cooperation to the States during this crucial juncture.
Advisor to CM (Health) Dr Sapam Ranjan, Chief Secretary Dr Rajesh Kumar, Principal Secretary (Health)  V Vumlunmang, Secretary to CM Ningthoujam Geoffrey, Director (Health) Dr K Rajo and other officials of Health Department attended the meeting.
Crowds at hill stations
Mr. Modi expressed concern over the teeming crowds at hill stations by holiday-makers, saying that while trade and tourism were important, “the main question in everyone’s mind should be on how to prevent a third wave of the COVID-19 pandemic.”
The Union Government’s Rs 23,000 crore package for COVID-19 infrastructure was for ramping up testing laboratories, setting up oxygen units in hospitals and paediatric intensive care units (ICUs) and other infrastructure with regard to the disease, he pointed out. “Looking at the specific challenges thrown up by the terrain in the North- Eastern States, I would urge that temporary hospitals be set up with oxygen facilities and very importantly training of manpower be done to handle oxygen related care and ICU duties,” he said.
The best practices from across the country should be adopted in dealing with the pandemic and the help of all sections of society sought in ramping up vaccination rates in the North Eastern States, he noted.
Meghalaya situation
Meghalaya Chief Minister Conrad K. Sangma said the positivity rate in his State had not declined at the expected rate because of the scattered population, and two districts with a positivity rate of more than 10% were the biggest worries. He admitted that the vaccination drive had been slow because of initial reluctance but the pace had picked up over the last couple of days because of the involvement of MLAs, MDCs (Members of District Council) and civil society groups. “We will be able to cover all the eligible people by early October if we can administer 20,000-25,000 vaccines a day,” he added.
Assam Chief Minister Himanta Biswa Sarma said his State had ensured medical oxygen production, ICU beds, oxygen beds and isolation wards. He requested the Prime Minister to increase the allotment of vaccines to Assam so that the target of the entire population could be achieved at the earliest.
The Hindu