Why do you need the ‘colonial law’ of sedition after 75 years of Independence, CJI asks Govt 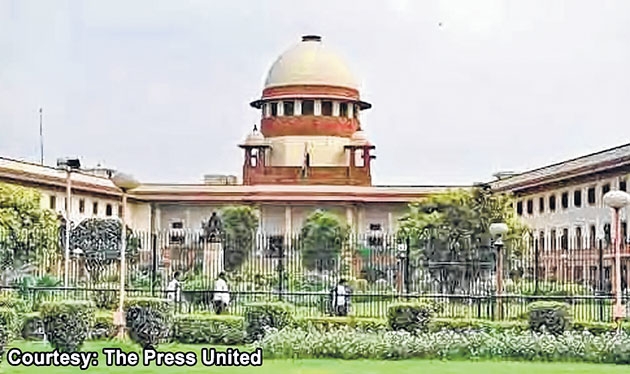 NEW DELHI, Jul 15
Chief Justice of India NV Ramana, in what may be an unprecedented judicial criticism of the way the sedition law is used by the Government to crush liberties, asked why a colonial law used against Mahatma Gandhi and Bal Gangadhar Tilak continued to survive in the law book after 75 years of Independence.
“Sedition is a colonial law. It suppresses freedoms. It was used against Mahatma Gandhi, Tilak... Is this law necessary after 75 years of Independence ?” Chief Justice Ramana, heading a three-Judge Bench, orally addressed Attorney General KK Venugopal and Solicitor General Tushar Mehta, appearing for the Centre.
The CJI said sedition or Section 124A of the Indian Penal Code was prone to misuse by the Government.
“The use of sedition is like giving a saw to the carpenter to cut a piece of wood and he uses it to cut the entire forest itself,” Chief Justice Ramana lashed out.
The CJI’s oral statement in open Court takes a significant note amidst rising public denouncement of Central and State law enforcement agencies using the sedition law to silence dissent, muffle free expression and for denying bail to incarcerated activists, journalists, students and civil society members. A number of petitions have been filed highlighting the “chilling effect” sedition has on the fundamental right of free speech. The CJI’s remarks has also opened the floor for debate and introspection on the Court’s own judgment in 1962, in the Kedar Nath case, which upheld Section 124A.
The CJI drew the attention of the Attorney General to the conviction rates under sedition.
“If you look at the history of use of this Section 124A of IPC, you will find that the conviction rate is very low. There is misuse of power by executive agencies,” the Chief Justice said.
‘Stale laws’
The CJI asked the Government why it did not throw out the sedition law along with the hundreds of “stale laws” it had expunged from the statute books.
“Your Government is taking out a lot of stale laws from the law books, why have they not looked into this,” Chief Justice Ramana asked Mr Venugopal.
“We are not blaming any particular Government or State. But do look at how Section 66A of the Information Technology Act is continuing to be used... How many unfortunate people have suffered ? And there is no accountability for all this...” he noted.
The CJI said the sweeping powers of Section 124A gives even a village police officer carte blanche to trample on the right to liberty and free speech of ordinary citizens.
“If a police officer wants to fix anybody in a village for something, he can use Section 124A... People are scared. Our concern is misuse of the law and the lack of accountability. Why has it continued in the statute book even after 75 years of our Independence,” Chief Justice Ramana asked the Government’s law officers repeatedly.
The Chief Justice said the Supreme Court would “definitely look into this Section 124A”.
‘Grave situation’
“The situation on the ground is grave... If one party does not like what the other is saying, Section 124A is used... It is a serious threat to the functioning of individuals and parties,” Chief Justice Ramana noted. Mr Venugopal submitted that the Court need not strike down Section 124A.
“It is enough to see if there were any excesses in its use and limit the Section to its real purpose… That would be enough,” Mr. Venugopal said. The Bench issued notice to the Centre on a petition filed by retired Army General SG Vombatkere, represented by advocates PB Suresh and Prasanna S, to quash Section 124A.          The Hindu