Highest number of deaths in the age group of 61 to 75 years : Dr Rajo 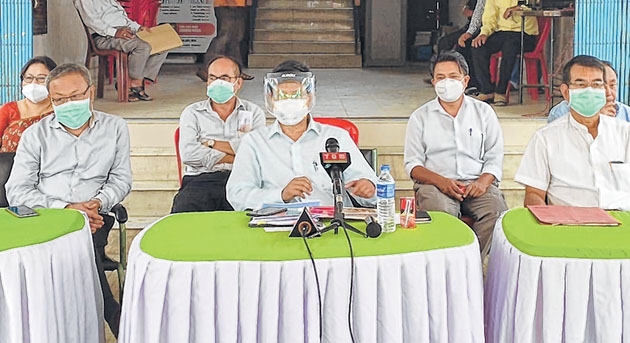 By Our Staff Reporter
IMPHAL, Jul 17 : Disclosing that the highest number of deaths has occurred among those in the age group of 61 to 75, Health Director Dr K Rajo today informed that 350 people in this group have succumbed to the virus till date. This makes up for 35.27 percent of the total deaths.
Manipur has recorded a total of 1365 deaths till July 17, 2021 due to the virus.
Speaking to the media at the office of the Health Directorate at Lamphel today the Health Director detailed the deaths in the different age groups as those below 15 at 3 deaths; 16 to 30 at 19 which works out to 1.9 percent of the total fatalities.
Those in the age group of 31 to 45 make up 17 percent of the deaths with 155. Others in different age groups are given as 46 to 60 (293 deaths) which is 29.44 percent; 76 to 90 (157) which is 15.77 percent; those between 91 and 100 is 21 which is 15.77 pc.
Those who passed away due to co-morbidities total 619, said Dr Rajo and added that this make up for 61 percent of the total deaths. So far four on home isolation have passed away, he said and added that one health care worker has passed away due to the virus.
The death rate in 24 hours is 29.74 percent and in 48 hours it is 8.94 percent.
The highest number of deaths was recorded in May with 402, said the Director and added that in June the number of deaths was 343, and so far it is 200 in July, he added.
Amongst the district, Imphal West has logged the highest number of deaths and Imphal East has recorded 345 deaths. Pherzawl so far has seen no deaths, he added.
The highest number of deaths is at JNIMS with 288, said Dr Rajo and added that at RIMS it is 258.
The Delta variant is highly transmissible and can make those infected seriously ill and added that it is the Delta variant which is driving the count.
Many of those infected with the said variant need hospitalisation and ICU support.
Many countries are facing the brunt of the variant, said Dr Rajo and cited the examples of Indonesia, Israel, Bangladesh etc. Many of those infected have to stay alone at the hospital, even in the ICU, said the doctor.
The best way open to the people is not to get infected, said the Director and stressed on the importance of observing Covid Appropriate Behaviour.
Calling out to the people to maintain discipline, Dr Rajo urged all to stick to the SOPs laid down by the Government and added that getting vaccinated is the only way for the people to avoid serious complications of the disease.
It is also important to wear the face masks in the correct way, said the Director and urged all to wear masks that fit them properly.
The mask should not be touched as far as possible, said the Director stressed on the importance of maintaining social distancing and washing one's hands thoroughly with soap and water.
Even inside the house, it is now important to wear the mask as the virus is airborne, said the Director further.
Other measures mooted by the Health Director included, keeping the room well ventilated, staying put at one's own house and staying away from large crowd. Everyone should follow the guidelines diligently, else situation make take a turn for the worse, he added.
The only way to control the situation is for everyone to abide by the Covid Appropriate Behaviour and get oneself vaccinated, said Dr Rajo.
Giving reasons for the present situation, the Director said vaccine hesitancy in the initial stage is one reason and added that this stage seems to have passed now, with many more turning up for their vaccination jabs.
It is to control the situation that the Government has put in several measures, said Dr Rajo and added that despite the growing number of cases and deaths, the situation can be controlled if everyone adheres to the Covid Appropriate Behaviour and get themselves vaccinated.
The intake capacity of Covid Care Centres has been hiked appreciably to deal with the burgeoning cases, he said and added that efforts are also on to increase the same. Beds are now available at all the Government, private and district hospitals, he added.