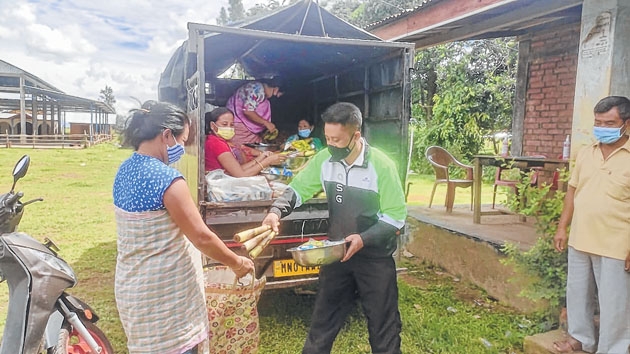 By Our Staff Reporter
IMPHAL, Jul 18: Distribution of relief items in COVID-19 affected areas continued at several parts of the State by various individuals and organisations.
In continuation of its initiative of extending help to the people amid the difficult times of COVID-19 pandemic, general secretary of LJP State Unit, Khundrakpam Kanba Meitei distributed essential items to households of Lamdeng Khunou, Pheidinga, Kameng Sabal, Karong and Sangaithel Ching Leikai and Awang Leikai in association with LJP Booth Level Committee and local club members today.
Further he also distributed relief items to households in the containment zones of Awangkhunou, Mayanglangjing Tamang, Kachikhul, Khonghampat Akham and Tharoijam.
The locals expressed gratitude to K Kanba Meitei for his generosity.
Kshetrigao
Nahakpam Rekha, wife of Nahakpam Indrajit, MLA of Kshetrigao Assembly Constituency called for sincere efforts from the residents of Kshetrigao AC to make it a Covid free constituency.
She made the above appeal while speaking on the sidelines of distribution of edible items to households of the home polling of the MLA at 4/12 Thambalkhong Sabal Leikai and 4/18 Top Awang Leikai yesterday. The edible items for Thambalkhong Sabal Leikai was distributed at Nungthilchaibi community hall and around 200 households were covered in the distribution programme.
Later the edible items for 4/18 Top Awang Leikai were distributed in the residences of three Ward Members and around 300 households were covered.
Apart from distributing the edible items, she interacted with the locals and discuss about the various problems faced by them during the COVID-19 pandemic and assured of providing all possible from her side to alleviate the problems.
She also stated that edible items have been distributed to around 15,000 (fifteen thousand) households in Kshetrigao AC till date and have also extended help van drivers, those staying in rents and to many households in the constituency to provide some relief amid the difficult time of the pandemic.
LAMLAI
Relief items were distributed to 19 families in containment zone at Itam Nungoi; 7 families at Sawombung; 3 families in Sawombung Kabui Khunjao; 43 families in Nungoi; 2 families in CHalou; 7 families in Napet; 6 families in Seijang and 2 families in Lamlai under the initiative of Kh Ibomcha, member BJP Manipur State Council and chairman of COVID-19 2nd Wave Fighting Task Force BJP Lamlai Mandal yesterday.
The relief items included lentils, cooking oil, potato, salt, onion, sugar etc.
KAKCHING
Social Worker Maibam Dhanabir also distributed relief items to 93 families affected in and around the containment zone in Hiyanglam yesterday.
Speaking at the event. Maibam Dhanabir appealed everyone to get tested as early detection will help in getting the best medical care.
He also appealed everyone to get vaccinated at the earliest as getting vaccinated is one of the biggest weapons in the fight against the pandemic.
PATSOI
Social Worker W Dineshchandra also distributed relief materials to 30 families in Toubungkhok Mayai Leikai in and around the containment zone yesterday.
He also handed over masks, sanitizer and financial assistance to Paona Memorial Club and gave tin roofing sheets to a family in Tera Lukram Leirak Mayai Leikai.