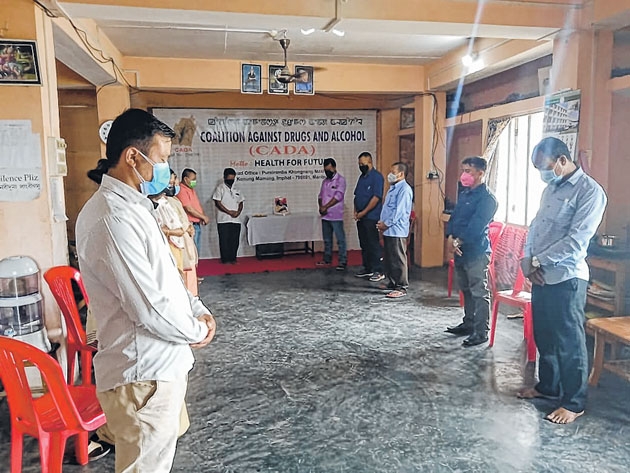 IMPHAL, Jul 18
Several civil society organisations (CSOs) and political parties mourned the untimely demise of the president of All Manipur Tammi  Chingmi Apunba Nupi Lup, Soibam Ongbi Momo Leima popularly known as Ima Momon and sent in their condolences.
International Peace and Social Advancement (IPSA), Chanura Lamchinglel Kangleipak (CLK), United NGOs Mission- Manipur (UNM-M), Leihou Khunai Kanba Luptin (LKKL), Indigenous Minority Organisation Manipur (IMOM), Kanglei Ima Lup (KIL), Thangmiband Apunba Nupi Lup (THANIL) and Yaipha Thourang Nupi Lup of Wangkhei Hijam Leikai condoled the demise of Ima Momom.
The aforesaid CSOs and stated that she was a committed human rights activist who sacrificed her life for protection and promotion of the human rights in the State. She contributed ardently in the major issues of the State and strived selflessly for the upliftment of the indigenous people, added the statement.
Ima Momom also spearheaded the Meira Paibi movement and actively worked for the welfare of women folk and for the overall development of the society.
Her intense participation demanding to repeal the Armed Forces Specials Powers Act (AFSPA), 1958 will always be remembered by all and was one among the 12 women who staged naked protest in front of the Kangla Gate against AFSPA.
The CSOs also stated that her demise will leave an irreparable void  and is a big loss for the State and prayed that the departed soul may rest in peace and also shared the pain and grief of the bereaved family.
Coalition Against Drugs and Alcohol (CADA) held a condolence meeting on July 17 condoling the demise of Ima Momon at the head office of CADA at Konung Mamang Pureiromba Khongnang Makhong adhering to Covid SOPs and floral tributes were paid to her photo by the attendees and observed two minutes silence praying for the peace of the departed soul.
CADA in a statement recounted the contributions of Ima Momon who spearheaded the 'Nisha Bandh' movement ever since 1980s and strive earnestly to protect the people of the State from the clutch of drugs and said that she played a major role in the formation of CADA.
The Manipur People's Party (MPP) also deeply mourned the demise of Ima Momon and her countless contributions in the important issues were enumerated.