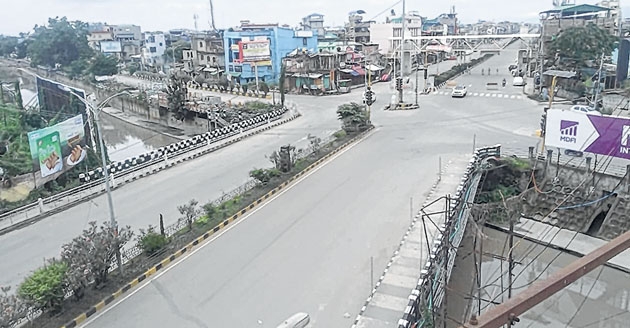 By Our Staff Reporter
IMPHAL, Jul 18 : With an aim to break the transmission of the virulent COVID-19, the Statewide 10 days curfew began today.
Roads in Imphal West, Imphal East, Bishnupur, Kakching, Thoubal and hill districts wore a deserted look with only a few essential service vehicles plying and all shops except a few pharmacies remaining closed due to strict enforcement of  curfew by the State police.
On field inspection, The Sangai Express witnessed police deployed at strategic locations and collecting fines from curfew violators.
It may be mentioned that the order imposing 10 days curfew in the entire State starting today was issued on July 15 late night.
Speaking to The Sangai Express, Imphal East SP, N Herojit Meetei stated that the local Covid Task Force, youth clubs and meira paibi lups have assured of extending  support to the district police in enforcing the  curfew effectively.
Saying that the majority of vehicles plying on the roads are of essential service providers, the SP maintained  that the district police also came across some curfew violators.
The violators were fined and released after warning, he added.
Continuing that people's response to curfew on the first day is satisfactory, the SP appealed to the people of Manipur to extend their helping hand in breaking the chain of Covid transmission.
On the other hand, Imphal West SP Dr Sarangthem Ibomcha provided hand sanitizers, face masks, and water bottles to the police personnel enforcing curfew in Imphal areas.
He also said that people's response to the curfew is also satisfactory in the district.
Our correspondents also reported that the curfew is effective  in Moirang, Thoubal, Kakching, Chandel and border town Moreh on the first day.
Markets in Thoubal, Khongjom, Wangjing, Yairipok,  Lilong,  Nambol, Oinam, Bishnupur, Ningthoukhong, Moirang, Kwakta, Torbung Kumbi and Wangoo also  wore a deserted look. Even the shops and vendors in alleys were closed.
The State police also strictly enforced the curfew at Kakching and Chandel districts to arrest the spread of coronavirus.
Our Kangpokpi correspondent also reported that the 10 day curfew was strictly imposed in the  district by the district police while extensive vaccination was also held at various places in the district despite today being Sunday.
Kangpokpi town wore a deserted look as Kangpokpi police led by Inspector Henminthang Kipgen, Officer-in-Charge Kangpokpi Police Station in collaboration with Covid Task Force Kangpokpi strictly enforced curfew within Kangpokpi town.
All shops were closed while vehicular movement was almost nil as only exempted vehicles were seen moving along the road.
Public movement was also strictly prohibited by the police and CTF Kangpokpi volunteers within the bazar area as well as in all localities of the town.
Meanwhile, a house to house testing was conducted at Kangpokpi Ward no 9, wherein seven individuals including two children below 7 years were found positive out of 93 samples tested.
Some households, however, were seen locking their gate and staying away from the test. CTF Kangpokpi took the lists of such households to report to the town committee.
In Kangpokpi town alone, 10 positive cases including one at District Hospital Kangpokpi, three in contact tracing at Kangpokpi Ward No. 4 and seven in house to house testing at Kangpokpi Ward No. 9 were detected today.