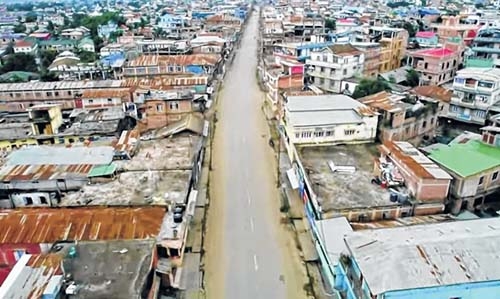 Our Correspondent
CCpur, Jul 19 : The highly transmissible variant of COVID-19 – Delta Plus is behind the surge in new cases and high fatality in Churachandpur, official sources said, even as the district reports 1,552 new cases and 28 deaths in the past 19 days.
A figure that stood next to the twin capital districts of Imphal East and West.
Today, four new deaths were reported in the district along with 83 new cases. 92 people are said to have been recovered.
The CMO Churachandpur, Dr VC Pau said, 27 samples from the district that were sent for genome sequencing all turned out to be of the deadly Delta Plus variant. This, he believes, is one of the principal causes behind the rapid spike in new cases.
It is also claimed that late detection of the disease, enhanced with the deadly variant, is making the fatality rate surge.
At the current rate, new cases along with the death cases will soon exceed the preceding month as July’s record tally was 1,963 and the fatality recorded was 32.
The test positivity rate too constantly hovers above 15 percent in July, as against last month’s 13 percent. In May, believed to be the peak in positivity, the rate was 21 percent.
Strict enforcement of the State-wide curfew by the police as well as VLTF and vaccination of the eligible population at the earliest will be critical in breaking the chain of spread, said an official.
The police ought to be more vigilant and the public more aware. The curfew needs to be imposed in the strictest manner at least in the town areas. The public should be aware that the Delta Plus variant is known to have dodge the vaccine’s efficacy at times in people with comorbidities, claimed the official.
According to the CMO, failure to maintain strict Home Isolation is another cause of concern as it is found in many instances that people in home isolation have contracted the disease to members of their families. Avoiding physical contact and wearing a face mask even at home should be adopted.
There are some localities that have been on a lockdown for quite some time now but new cases continue to emerge unabated.
A memorandum issued by the CMO on 16 July therefore said home isolation  should only be considered after taking into consideration the house condition and other eligibility factors. Otherwise newly detected positive clients, though asymptomatic, should be shifted to the nearest CHIC in consultation with the VLTF.
Meanwhile, the district is slowly inching closer to the half-way mark in vaccinating the eligible population with a record 2,000 plus believed to have been vaccinated today. Dr Paulunmang, the man in charge of vaccination said the district’s vaccinated population now stands at about 46 percent.
Over and above the efforts made by the medical department and village level committees and NGOs, the Churches have started making efforts to get its members vaccinated, pinning hope on the authority to further speed up the vaccination drive.
Yesterday, the EBC Church Hiangtam Lamka hosted a vaccination campaign within its campus with about 300 people getting vaccinated. Earlier the RPC Saikot had also conducted a similar campaign at their campus.