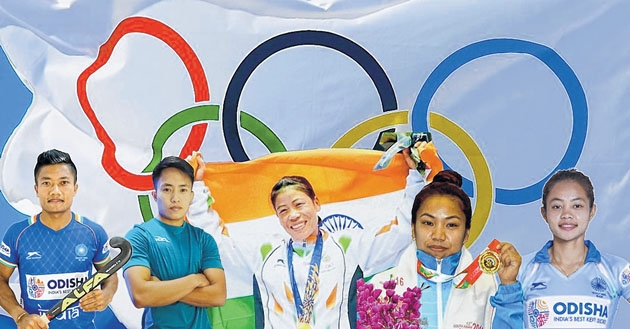 By Our Staff Reporter
IMPHAL, Jul 21: The Manipur Olympic Association (MOA) has extended best wishes to 5 athletes in the Indian contingent for Tokyo Games 2020.
A mass prayer led by the MOA president and members along with guardians of the State athletes was held today seeking blessing for the athletes at the association's office at Khuman Lampak.
The association wished that MC Mary Kom (boxing), Saikhom Mirabai Chanu (Weightlifting), Sushila Chanu Pukhrambam (Hockey), Sushila Likmabam (Judo) and S Nilakanta Sharma (Hockey) may emerge victorious and bring laurels to the country and the State.
MOA president, Th Radheshyam cheering for the contingent and the 5 sportspersons from the State in particular, prayed that the athletes may script new success stories and inspire budding players in the State and the country.
He also urged all sections of the society to cheer State athletes so that they may give their best at the world's biggest sporting event and bring home laurels.
The All Club Organisation, Association and Meira Paibi Lup, Federation of Haomee, Chanura Lamchinglel Kangleipak, Kanglei Ima Lup (KIL) and the Apunba Manipur Huyen Lanlong Lup also extended best wishes to the State athletes who are set to compete in 4 different sporting disciplines (boxing, hockey, judo and weightlifting) at the Tokyo Games which will open on July 23.
In the meantime, the All Manipur Gymnastics Association has congratulated Dr Sanasam Shantikumar, who is also general secretary of Gymnastics Federation of India, on being named as a National Olympic Committee delegate for the Tokyo Games slated to begin from July 23.
The associatiation, in a press release also wished success to all the State atheletes who will be competing at the event.