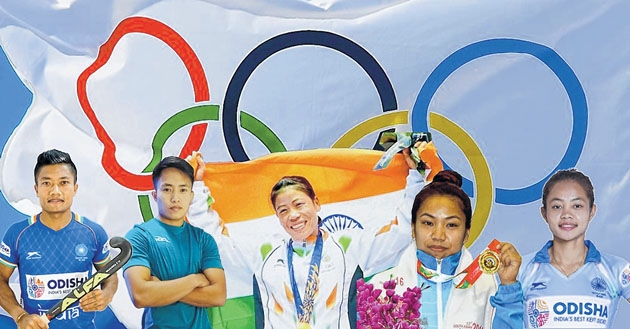 IMPHAL, Jul 23
Wishes and prayers to State athletes representing India at the Tokyo Games continued to pour in from various sections of the society.
It may be worth mentioning that MC Mary Kom (boxing), Saikhom Mirabai Chanu (weightlifting), Likmabam Sushila (judo), Pukhrambam Sushila (hockey) and Shanglakpam Nilakanta Sharma (Hockey) will be competing in their respective events at the mega sporting event hosted by Japan.
The Netaji Memorial Club in a message not only extended best wishes to the athletes to bring home medals but also prayed that they return safe and sound.
The Indigenous People's Association of Kangleipak (IPAK) in a press release, also expressed pride over the State players for making it to the grandest sporting extravaganza despite Manipur being a small State.
May all the athletes shine in front of billions of spectators and make the Country and the State proud, IPAK prayed.
IPAK also urged the State Government to give more emphasis to support the State athletes and provide requisite infrastructure to help produce world class athletes.
The Bharatiya Janata Party Sports Cell, Manipur Pradesh also prayed to God to give the State athletes more strength and help win medals at the Tokyo Games which kick-started today.
May the athletes not contract Covid but bring home laurels by producing their best, the sports cell of the party said in a press release.
The International Peace and Social Advancement (IPSA) in a press note also wished success to the State athletes who will be featuring in the world's most prestigious quadrennial sporting event where more than 11 thousand athletes from 205 Nations will be competing for top honours. Inclusion of 5 State players in Indian Contingent consisting of 125 players, is itself a matter of pride, said IPSA and encouraged the State players to prove their mettle in front of the world.
May all the athletes keep the flag flying high and help alleviate the suffering of the State people worst hit by the pandemic to the extent possible with their performances, IPSA prayed.