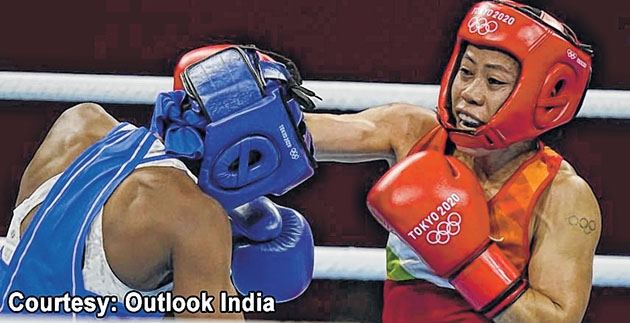 TOKYO, Jul 25
Mary Kom is hungry for more. The 6-time world champion and the London Olympics bronze medallist is looking to win the elusive Olympic Gold in Tokyo and she made her return to the Games after 9 years in a sensational manner.
Mary Kom stormed into the pre-quarterfinals of the Flyweight Women's category after beating Hernandez Garcia, a 23-year-old from the Dominican Republic 4-1. Mary outpunched her opponent in the 3rd and final round after opening her bout on a cautious note. The 38-year-old was in her element as she unleashed a flurry of punches in the final round to win the bout by split decision.
Mary Kom is looking charged up and Mirabai Chanu's Silver medal on the opening day is only going to serve as extra motivation for the fellow Manipuri. The mother of four knows what makes the Manipur athletes shine at the biggest stage.
Speaking to India Today Consulting Editor, Sports Boria Majumdar moments after her first-round win at the Kokugikan Arena on Sunday, Mary Kom said it's the hard-working nature of the Manipuris that sets them apart.
"We Manipuris are tough people. We don't come from privilege but we will keep fighting harder and harder and harder till we reach our goal," Mary Kom said.
This win is for my kids: Mary
Mary won the Olympic bronze in 2012 and she proved she was not done even after missing the Rio Olympics qualification by winning the world championships gold in front of her home fans in 2018. A bronze followed at the 2019 World Championships.
After returning to action following the pandemic, Mary Kom proved she was all charged up for Tokyo by winning a silver in the Asian Championships on May 21. But the 38-year-old boxing great believes she has it in her to go for the elusive gold in Tokyo.
Shedding light on her motivation to compete in Tokyo, Mary added: "This (win) is for my children. Only thing missing for me is the Olympic gold and that's why I am here despite Covid-19 pandemic."
Mary will face 3rd-seeded Colombian boxer Valencia Victoria and it will be a tough test for the Indian. However, it will not be wise to count her out, considering her experience and class.
India Today