Red carpet rolled out for Mirabai at Delhi Airport 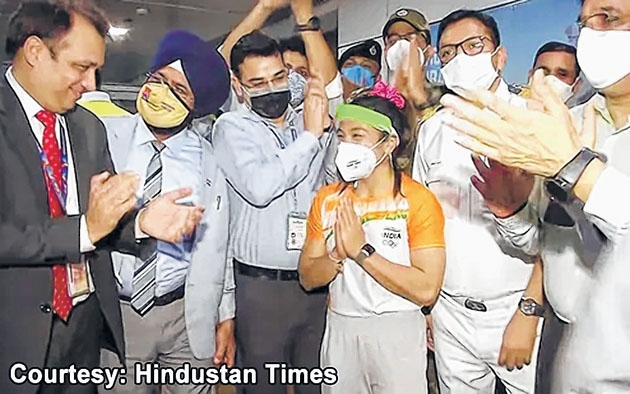 NEW DELHI, Jul 26
Olympic silver medallist Mirabai Chanu returned from Tokyo, to a rousing welcome amidst tight security, at the Indira Gandhi International Airport here on Monday. Quite thoughtfully Mirabai retained her face shield and mask, when she was escorted by security personnel and other officers.
“It is a fruit of five years of hard work. I learnt a lot from the Rio failure. Winning an Olympic medal was my dream. I was confident that I would do my best and return with a medal this time. I am very happy,” said Mirabai. Even as Mirabai thanked the Prime Minister, the Sports Ministry, especially the Target Olympic Podium Scheme (TOPS) for the best support when required, coach Vijay Sharma put things in perspective.
“After the first lockdown, it was thanks to TOPS’ sanction of Rs 60 lakh that we could train in the US. The reward for that training came in the Asian Championship. Later, before the Olympics we got the clearance and US visa in time to train tension-free when TOPS sanctioned Rs 75 lakh. That played a huge role in this Olympic medal. If TOPS had not supported this well, the result may not have been that great,” said Vijay. Both Mirabai and the coach said that it could have been a far better fight for the gold against the Chinese, but for the 49kg lifter facing a “biological situation”, a day prior to the competition.
“I was tense. I thought that it would have been better if it had not happened at this time. Then, I told myself that it keeps happening. So, better to forget about it, and focus on my competition,” Mirabai said about dealing with her menstrual cycle. It was a courageous performance by Mirabai on the opening day. The Hindu