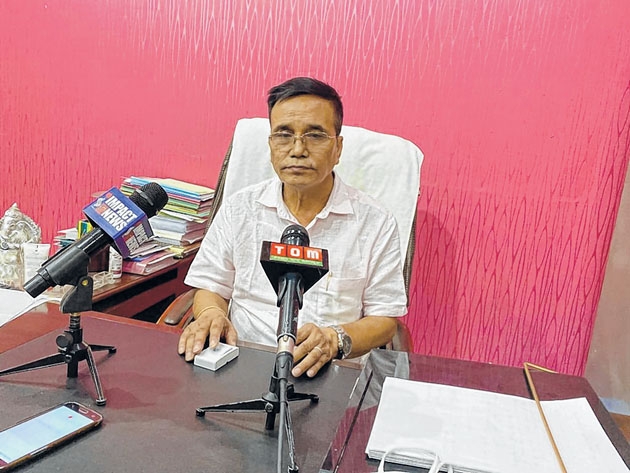 By Our Staff Reporter
IMPHAL, Jul 28: BJP State Unit Protocol Committee Chairman K Saratkumar has alleged that Jiribam MLA Ashab Uddin has always been against BJP and has also been plotting a plan with Congress party to bring down the BJP led Government in the State.
K Saratkumar said this at a press conference and added that Ashab Uddin's support to BJP was garnered by him at Guwahati however, just after a month, Ashab Uddin had met with Rahul Gandhi to plot against BJP.
He also alleged that Ashab Uddin had always worked against BJP on many occasions including the Lok Sabha election.
K Saratkumar also added that the statement made by Ashab Uddin that the road connecting Jiribam and Tipaimukh is to be repaired by the Government is really unfortunate for the people living in these areas. As this stretch of road was in a dilapidated condition hampering free movement of vehicles including trucks carrying rice and daily essentials, CSOs and communities of the area had informed him about the condition and sought assistance.
Following the request, he had initiated the repairing of the said stretch of road but Ashab Uddin had expressed displeasure over this.
K Saratkumar told the media that the Barak circle has many resources including seasonal fruits like Pineapple, but due to poor connectivity, such products are wasted. The development of these roads will ensure that the farmers can sell their  produce.
K Saratkumar also demanded clarification on where the MLA Local Area Development Funds have been used.
If the people of Jiribam elect him as their representative in the upcoming 12th Manipur Legislative Assembly election, K Saratkumar promised that he will complete the development of Jiribam Tipaimukh road within three years and if he fails to do so, he will resign.