Why the NE has hot border disputes 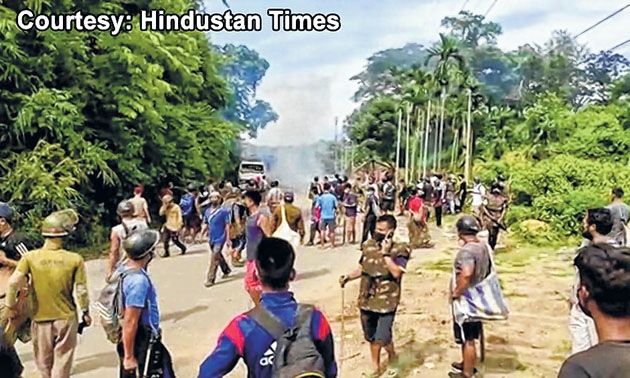 NEW DELHI, Jul 28
Peace in India’s North East, home to a dazzling array of ethnic communities and distinct cultures, was shattered when police forces of Assam and Mizoram clashed over a border dispute on Monday. Five policemen from Assam died. The violence shocked the country.
North Eastern States have a history of ethnic strife. Internal border disputes go back at least a century. The triggers for them often are disputed claims over land, forest resources, perceived encroachment, ethnic differences, even rumours.
Assam’s many longstanding interstate border disputes have their roots in how the State was carved up to form other States in the region. Mizoram was once part of Greater Assam.
The North East, a region also tethered to international boundaries with China, Myanmar and Bangladesh, was once an amalgamated region comprising three large States : Assam, Tripura and Manipur.
Assam was carved up into Meghalaya, Mizoram, and Nagaland. What was once known as the North-East Frontier Agency became Arunachal Pradesh in 1987. Nagaland’s formation happened in 1963. Meghalaya became a separate State in 1972 and Mizoram was declared a Union Territory the same year. It became a State in 1987. Borders were never properly demarcated or unquestionably accepted by all sides, leaving States to feud.
Legal pluralism, a concept that refers to a situation where there is more than one source of law, including traditional customs, is widely practised in the region which influences dispute resolution. The Constitution’s Sixth Schedule, which applies to tribal areas in Assam, Meghalaya, Tripura and Mizoram, grants the region’s tribal populations considerable autonomy through autonomous councils, which have powers to enact laws on land, agriculture, forests and health etc. They have sway over political matters, including land disputes. Assam has border disputes with Mizoram, Nagaland, Meghalaya, and Arunachal Pradesh. There have been several attempts, overseen by federal authorities, to reach settlements.
The latest flare-up in Assam’s Cachar district, according to reports, began when Mizoram Police objected to an Assam Police post in the area. The Chief Ministers of Assam and Mizoram, Himanta Biswa Sarma and Zoramthanga, who goes by one name, sparred, each accusing the other of transgressing. The firing by Mizoram police, leading to the death of five Assam policemen, heightened tensions.
Hot borders
Assam-Mizoram : Mizoram attained Statehood in 1987. Chief Minister Zoramthanga, a three-time head of the State, is a former militant and was deputy to Laldenga, a revered Mizo insurgent who led a secessionist movement that was peacefully settled with the signing of the Mizo Accord.
Back in 1875, a colonial notification demarcated the Cachar Hills (present-day Assam) and Lushai Hills (present-day Mizoram). Mizoram disputes its current borders with Assam which go back to that year. Three districts of Mizoram, Aizwal, Kolasib and Mamit, have a 169-km-long border with south Assam’s Cachar, Hailakandi and Karimganj districts. Monday’s clashes took place in an area near Kolasib. The first recorded clashes happened in 1972.
Assam-Nagaland: Assam’s most serious border dispute has been with Nagaland. Clashes there date back to the 1960s with the worst spiral in 1985 over parcels of land in Merapani, a northern subdivision half of which lies in Assam’s Golaghat and the other half in Nagaland’s Wokha. Nagaland does not agree to a 1963 border demarcation.
Assam-Meghalaya: When Meghalaya was part of Assam, Assam’s capital was Shillong, an idyllic hill station the British called Scotland of the East. The main dispute spans swathes of areas in Meghalaya’s West Garo Hills and Assam’s Kamrup district that includes Guwahati. In 2010, a fatal skirmish between Khasi and Garo tribes and Nepali inhabitants of Assam erupted. Clashes recurred in 2012 and 2018.
Assam-Arunachal Pradesh : A border dispute north of Assam began radiating in the late 1980s, with the Assam Government approaching the Supreme Court regarding its claims in 1989. Both sides started accusing each other of transgressing. In 2007, a major clash involving locals took place. The dispute before the apex Court is yet to be settled.
Hindustan Times