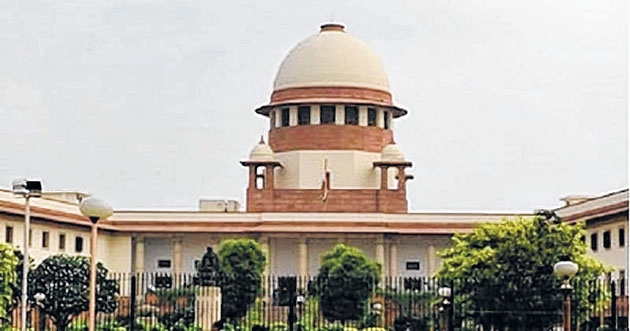 New Delhi, Aug 25 (PTI)
The Supreme Court Wednesday agreed to hear the petitions filed by three former Congress MLAs who have challenged the Manipur High Court verdicts upholding the order of the Assembly Speaker disqualifying them from being members of the House.
The apex Court issued notices and sought responses from the office of Assembly Speaker and others on three separate petitions filed by the disqualified MLAs who have challenged the June 2, 2021 verdicts of the High Court which had said there was enough material before the Speaker to draw inference that they had voluntarily given up their membership of Indian National Congress (INC).
The three MLAs were disqualified by the Speaker on June 18 last year after disqualification petitions were filed alleging that they had voluntarily given up their membership of the INC and given their support to the Bharatiya Janata Party (BJP).
It was also alleged in the disqualification petition that they had participated in political works and programmes hosted by the BJP.
A bench comprising justices UU Lalit and Ajay Rastogi, while asking the respondents to file their affidavits within two weeks, posted the matter for hearing on September 29.
The top Court was hearing three separate petitions filed by Kshetrimayum Biren Singh, Yengkhom Surchandra Singh and Sanasam Bira Singh who were elected MLAs as Congress candidates in the March 2017 Assembly election.
Senior advocate Mukul Rohatgi, appearing for the petitioners, told the bench that the High Court order be stayed.
The bench said it was issuing notice on the petitions and the matter would be heard on September 29.
Rohatgi told the bench that petitioners have approached the apex Court as the High Court had upheld their disqualification and the alleged  ground of disqualification is that they have voluntarily given up the membership of the Congress party.
He argued there were procedural as well as substantial flaws in the disqualification proceedings and the case has been built allegedly on the basis of media reports and photographs that these MLAs were seen with BJP leaders.
The MLAs have completely denied the allegations and have said they are still with the INC, he said.
In one of the verdicts passed on the petition filed by Kshetrimayum Biren Singh, the High Court had said, "On examining the photographs/videos and newspaper reports filed in connection with the disqualification cases, the existence of which was never denied by the writ petitioner, we are of the considered view that there were enough materials before the Speaker to draw an inference that the writ petitioner had voluntarily given up his membership of the Indian National Congress (INC)".
"In view of the ongoing discussion and findings, we are of the opinion that the orders of the Speaker are in accordance with the provisions of Tenth Schedule of the Constitution of India and do not call for any interference by this Court in exercise of the power of judicial review under Article 226 of the Constitution of India. The writ petition, therefore, fails and is accordingly dismissed," the High Court had said.