An officer and a gentleman (Remembering the men of character) 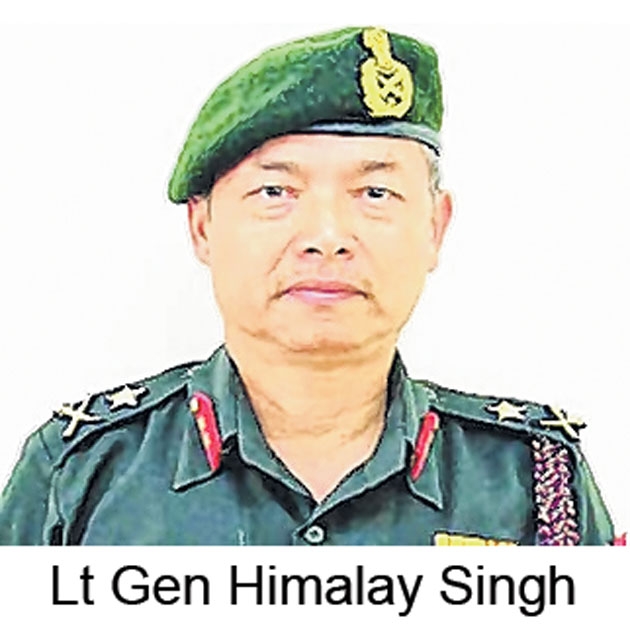 Lt Gen (Dr) Konsam Himalay Singh (Retd)
Manipur has perhaps the highest per capita number of officers presently serving  in the Indian Defence Forces. The State officers and soldiers have excelled in various facets of military service since a long time. Be it in war or warlike situations, many have performed in a most exemplary manner. Late Major Jotin of Army Medical Corps earned India’s highest peacetime gallantry award of Ashok Chakra for his bravery in fighting the terrorists in Afghanistan during 2010.
Many more have sacrificed their lives in the line of duty to safeguard the security of the country. Many more have earned very high peacetime and war time Presidential awards as well. Many more also went unsung.
Maharaj Kumar Captain Priyobrata Singh and Padma Shri Major R Khathing, MC, MBE (Military Cross and Member of British Empire), were pioneers in the State to join British Indian Army during the World war 2. Both of them did the State proud in their respective assignments. The role of Major R Khathing, as an Assistant Political Officer, along with the Assam Rifles, in the integration of Tawang to Indian Union during 1950 is one of the  legendary events in our history. Major Khathing also became the first Minister of the Hills in the State Cabinet 1948.
Late pabung Lt Col Haobam Bhuban Singh was the first post-independence commissioned officer from the State in 1957. He went on to become the first to command a Unit as a  Lt Col from the State. He served as Chairman of the Manipur Public Service Commission. He was also president of State BJP unit. I have had the privilege of knowing and interacting with legends like Maharajkumar Priyobrata Singh, Major Khathing and Colonel Bhubon Singh during my early career in the army. They were the inspiration for many of us who aimed to join the forces. They were also perfect gentlemen and officers.
Many others followed their footsteps in the Indian Defence Forces thereafter. The National Cadet Corps was also responsible to send many more future officers in various streams of the military.
The Sainik School at Imphal has contributed immensely to the increasing number of officers from the State. Many who studied in Sainik School, Goalpara, Assam and Sainik School Purulia, West Bengal also contributed to the officer corps and rose to many high ranking positions in the military.
We have two Lt Generals, 4 Brigadier level officers and many Colonels and equivalents among the fraternity. Many Doctors, Engineers, technocrats and other streams from the State, both from the Hills and Valley, have since joined in large numbers as Short Service Commission officers or as regular officers today. More importantly, quite a few ladies are serving as officers in various branches of the military.
I am confident that we shall see many more heroes as well as many high ranking officers from the State in the years to come. The human capital of  the State is preeminently suited for the Armed forces. Our youth have it in them. Our youth are energetic, intelligent, courageous, and have leadership qualities in them.
Just as a diamond needs to be cut to give it the shine, our youth also have to be trained and given the opportunity to play their rightful role in the Nation-building. Leaders are made by their sheer dint of dedication and hard work. Above all, by their character, qualities and integrity and a sense of purpose for the higher calling in them. A leader is also expected to be honest, fearless and a man of wisdom all combined. A gentleman is one who means what he says, is humble, reliable, dedicated, self- disciplined and a team player. Indeed, it is said that one cannot be an officer if one is not a gentleman.
Indian Army officers are expected to follow the code laid down by Field Marshal Philip Chetwodein 1939.
“The safety, honour and welfare of your country come first, always and every time; The honour, welfare and comfort of the men you command come next; Your own ease, comfort and safety come last always and every time.”
Today, on his birthday,  I miss Yambung Col Rajkumar Paka Sana, who was an epitome of these qualities of a leader. He passed away on 17th of this month at Delhi after fighting an illness for a few months. He was a true Officer and a Gentleman. He remained a perfect gentleman till the end. A man of few words, yet, earned so much respect from one and all even after his retirement. He was commissioned into the famed Gorkha Rifles at the time of Indo-Pakistan war of 1971.
I call upon more young generation of the State to aim for the higher calling in your lives.
What better than serve the country with pride and to be an officer and a gentleman, to be walking with your head held high. Many of us did it, You can do it too.
To quote Rudyard Kipling:-
“ IF YOU CAN DREAM-AND NOT MAKE DREAMS YOUR MASTER: IF YOU CAN THINK AND NOT MAKE THOUGHTS YOUR AIM……
IF YOU CAN FILL THE UNFORGIVING MINUTE, WITH 60 SECONDS WORTH OF DISTANCE RUN,
YOURS IS THE EARTH AND EVERYTHING THAT IS IN IT,
AND-WHICH IS MORE-YOU WILL BE A MAN, MY SON !”