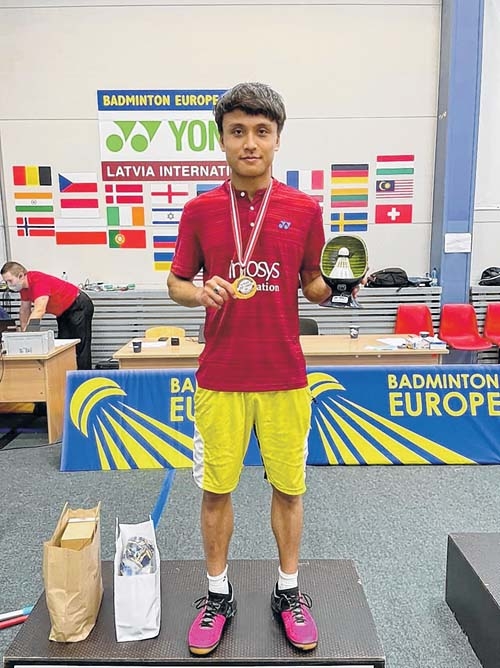 Jelgava, Aug 30
Maisnam Meiraba created history by becoming the champion on debut at the Yonex Latvia International Future Series Badminton tournament in Jelgava on Sunday.
The four-day tourney was organized by the Latvian Badminton Federation under the auspices of Badminton World Federation (BWF).
Qualifier Maisnam Meiraba overcame a stiff challenge from France’s Alex Lanier in the summit clash to clinch the title in his first ever senior international tournament.
Eighteen-year-old Meiraba edged past Lanier 21-15, 12-21, 22-20 in a marathon men's singles match which lasted an hour and 15 minutes.
Meiraba, who doesn’t have a world ranking, converted his second match point to post perhaps the biggest win of his career so far.
Lanier is world No. 206 and regarded as one of the most talented youngsters on the European circuit.
Meiraba, a trainee at Prakash Padukone Badminton Academy in Bengaluru, started well in the final and claimed the first game quite easily.
But 16-year-old Lanier bounced back in style to pocket the second game with a brilliant display of power and precision. The Frenchman continued his momentum in the deciding game too and established an early lead.
Meiraba converted second match point to win an extended second game 22-20
Young Lanier maintained his lead and raced to a 16-12 lead. At that stage, it looked like Meiraba’s dream run will finally come to an end.
However, Meiraba did not give up and slowly caught up with his opponent. After leveling the scores at 18-18, he took the lead for the first time in the decider by winning another point.
Lanier also fought well and leveled the scores back at 19-19. Then, Manipur teenager Meiraba produced a superb winner to take a 20-19 lead.
Lanier saved a match point but he could not stop Meiraba from converting his second match point to seal the win.
Earlier in the morning, Lanier shocked sixth seed Danylo Bosniuk of Ukraine 21-16, 18-21, 21-16 to reach the final. The Frenchman registered a hard-fought win over his world No. 144 opponent in nearly an hour.
The 16-year-old had also surprised eighth seed Fabio Caponio of Italy 21-15, 21-15 in the first round on Friday. In the semi-final, Meiraba downed Malaysia’s Jing Hong Kok 21-11, 21-17 in 34 minutes to complete a hat-trick of wins. It was the third successive victory for the former world No. 2 in the Under-19 boys singles against his Malaysian rival in what was a clash between two qualifiers.
The reigning national junior champion had thumped Kok at the India Junior International in 2019.
Meiraba had accounted for Jing Hong Kok at the Badminton Asia Junior U-17 & U-15 Championships. The Indian teenager knew the game of Kok and planned his strategy accordingly.
Meiraba implemented his plans to perfection to record a fluent victory. The Malaysian had some excellent wins in the tournament which included beating India's Kiran Kumar Mekala, world No. 280, in straight games 21-8, 21-9 in the first round.             Sportskeeda