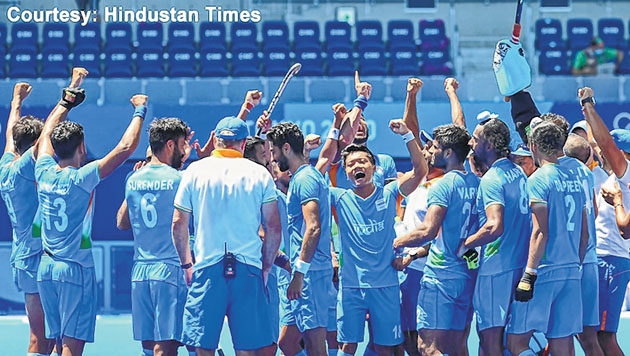 TOKYO, Aug 5
The victory against Germany at the Tokyo Olympics showcased India’s unending supply of grit, energy and outlined the work put in while training in isolation for more than a year in Bengaluru.
They fought like warriors and will return home as legends, having ended India’s 41-year wait for an Olympics medal in hockey. On Wednesday morning, India beat Germany 5-4 with a lionhearted performance to win the bronze medal in Tokyo.
The win showcased this team’s unending supply of grit and energy and outlined all the work put in while training in isolation for more than a year in Bengaluru. As coach Graham Reid put it, “Watch this space, we’ve got a lot more to do.”
This is India men's 12th Olympics medal in hockey, the highest in Games history, but the first after the gold medal in Moscow 1980. What’s more, India women’s team will play for bronze against Great Britain on Friday.
Going up against 2016 Olympic bronze-medallist Germany was always going to be a gargantuan task for the young Indian team. The Germans made their intentions clear within 90 seconds of the start as a swift move led to a goal-line scramble and Timur Oruz slipped the ball into the net.
The opening 10 minutes were played solely within the vicinity of the Indian circle. India had little to show in terms of attack and was forced into falling back to keep the lethal German forwards in check at the Oi Hockey Stadium North Pitch.
India goalkeeper PR Sreejesh produced two stunning reflex saves with less than 20 seconds left in the first quarter, but much to the team’s agony, the ball had struck an Indian defender’s leg in the build-up. The Germans reviewed and got a penalty corner despite the buzzer going off.
They won two more penalty corners and the timer for the break period had to be reset twice. The timer was to play a heart-stopping role through the game.
The Indians opened their account in style in the second minute of the second quarter. Nilakanta Sharma showed great vision to feed Simranjeet Singh, who beat the goalkeeper with a vicious strike.
Nilakanta, however, lost the ball cheaply in midfield a few minutes later and it proved costly. Germany cashed in for a 2-1 lead in the 24th minute as Niklas Wellen converted Christopher Ruhr’s pass.
India was further pegged back in the very next minute as Oruz dispossessed Surender Kumar before squaring for Benedikt Furk, who scored Germany's third goal.
With the defence under pressure after conceding two goals, the Indians mounted a comeback for the ages. Rupinder Pal Singh struck a thumping drag-flick in the 27th minute. Though Germany goalkeeper Alexander Stadler managed to keep it out, the deflection fell to Hardik Singh, who coolly put it in the back of the net.
India won another penalty corner two minutes later and Harmanpreet Singh scored his sixth goal of the tournament to bring his side back on level terms at 3-3. India’s quickfire comeback rattled the Germans, who huddled up before resuming play. The second quarter was exhilarating with five goals in 15 minutes, but there was more to come.
Rupinder found the back of the goal in the 31st minute from a penalty stroke, and it got better three minutes later. The Indians took a 5-3 lead with perhaps their best field goal of the tournament as Gurjant Singh made a stirring run down the right and served a delectable assist for Simranjeet, who made no mistake.
Captain Manpreet Singh and his team left no inch of the turf uncovered and chased down each ball. They ran like men possessed, putting in a superhuman effort. The Germans, in contrast, were losing the plot and their calm. They protested several decisions; words were exchanged between Martin Zwicker and Dilpreet Singh on the touchline and Hardik stepped in to separate them.
The pressure of the moment was getting to the players and the referees scrambled to keep the game in control. It all boiled down to the last 15 minutes.
Germany got a lease of life in the 48th minute when Lukas Windfeder made amends for giving away the penalty and got on the scoresheet. India had to hold on to a narrow one-goal lead for the remaining 12 minutes, as the Germans relentlessly charged forward.
Germany squandered a penalty corner in the 54th minute as Sreejesh produced a fantastic save and a mini scuffle broke out in the benches, with a couple of staff members also getting involved. The Germans, who had replaced their keeper with an outfield player, made the most of it and won another penalty corner with less than 10 seconds left.
There was more drama as the timer was off at the death for close to 10 seconds. Sreejesh made a last-gasp save which brought down the collective anxiety of the Nation and guaranteed India the bronze medal.
No amount of pressure tactics, timer malfunction or referee-haggling from the Germans, who were backed by a crew of 15-odd boisterous members in the stands, could derail India.
Sportstar