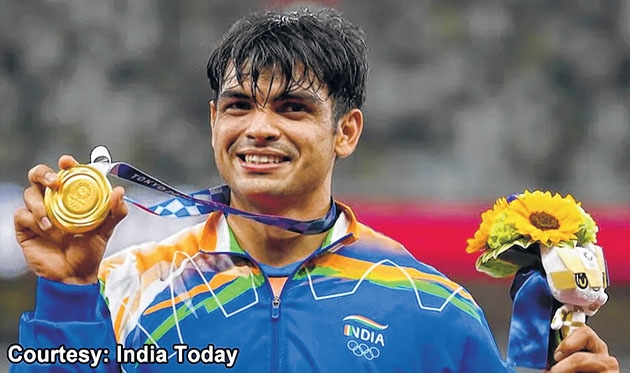 Tokyo, Aug 7
Neeraj Chopra has won GOLD in men's javelin throw at Olympic Games. With this, he has become the first Indian athlete to win gold ever. He had entered the finals with a stunning throw of 86.65m in his opening attempt that put him on top of the qualification round on Wednesday. In the finals, he covered his highest throw of 87.58m (in the second of six attempts).
Taking part in congratulating Neeraj Chopra, Chief Minister N Biren tweeted that the Government of Manipur will give an award of Rs 1 crore for the Gold won at the Olymics
In his very first attempt today, Chopra topped the list with throw of 87.03m, followed by Weber Julian (85.30) of Germany, Vadlejch Jakub (83.98) of Czech Republic, Vetter Johannes (82.52m) of Germany and Katkavets Aliaksei (82.49) of Belarus.
In the second round, Chopra bettered his first score with 87.58m — highest in the finals. However, in the third round, he finished at 76.79 m. The big relief came for India when gold medal favourite and 2017 world champion Vetter Johannes was out of the game after the third round, with his final best 82.52m.
Czech Republic's Jakub Vadlejch won silver with 86.67m and Vitezslav Vesely claimed bronze with 85.44m.
With this, India have won their first Gold at Tokyo Olympics.
Chopra is the first Indian to bag a gold medal in track and field in 100 years. He is now the second Indian after Abhinav Bindra to win a gold medal in individual events.
"Unprecedented win by Neeraj Chopra! Your javelin gold breaks barriers and creates history. You bring home first-ever track and field medal to India in your first Olympics. Your feat will inspire our youth. India is elated! Heartiest congratulations," President Ram Nath Kovind said on Twitter.
Prime Minister Narendra Modi said that a "History has been scripted at Tokyo!"
"History has been scripted at Tokyo! What @Neeraj_chopra1 has achieved today will be remembered forever. The young Neeraj has done exceptionally well. He played with remarkable passion and showed unparalleled grit. Congratulations to him for winning the Gold," he wrote on Twitter.
In March 2017, Chopra was appointed a Junior Commissioned Officer (JCO) in Indian Army. This came after Chopra had set a new junior record at the 2016 IAAF World U-20 Championship in Bydgoszcz, Poland.
This season, until today, India could not win any gold despite high hopes from some of the champions including Mary Kom and PV Sindhu. But that changed today with Chopra's 'golden throw'.
Chopra kept India's hopes alive by earning a direct entry into the finals as he sent the spear well past the qualifying mark of 83.50m in his first attempt in qualifying round on 4th August.
Competing in his first Olympics, he took just a few seconds to make the final round. He topped the Group A contest as well as the two qualifications rounds.
After his first throw, the 23-year-old athlete had left the javelin arena. He later said that he was at his first Olympic Games, and he felt very good. "In warm-up my performance wasn't so good, but then (in the qualifying round) my first throw had a good angle, and was a perfect throw," he added.
Ahead of the final, Chopra (Contd P 9)