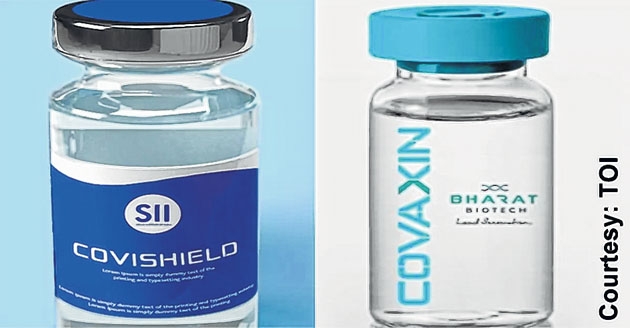 Pune, Aug 8
Mixing doses of Covishield and Covaxin vaccines is not only safe but also elicits better immunogenicity, a new study by the Indian Council of Medical Research study has found.
This is the first study which reports the effects of heterologous prime-boost vaccination with an Adenovirus vectored vaccine followed by an inactivated whole virus vaccine, researchers have said.
The study titled ‘Serendipitous Covid-19 Vaccine-Mix in Uttar Pradesh, India: Safety and Immunogenicity Assessment of a Heterologous Regime’, that is yet to be peer reviewed, was  released as a pre-print on medRxiv platform on Sunday.
It stated that immunisation with a combination of an adenovirus vector platform- based vaccine followed by an inactivated whole virus vaccine was not only safe but also elicited better immunogenicity.
While Covishield is the Indian version of AstraZeneca vaccine manufactured by Serum Institute of India, Covaxin is an inactivated whole virus vaccine (BBV152) developed jointly by Indian Council of Medical Research-National Institute of Virology (ICMR-NIV) and Bharat Biotech International Limited (BBIL).
It may be recalled that during the expansion of the vaccination programme, a group of individuals in Uttar Pradesh received Covishield as the first dose followed by the inadvertent administration of Covaxin as the second dose at an interval of six weeks.
The Nationwide vaccination programme at this time was just four months old and the event of mixed dosing raised considerable anxiety in the public domain, with a potential to contribute to vaccine hesitancy.
The ICMR and BBIL study was conducted by researchers at the ICMR-National Institute of Virology against this backdrop.
As a part of this project, 18 people received two doses of two different vaccines the reaction of which was compared to 40 recipients of two doses of Covishield and 40 recipients of two doses of Covaxin.
The study was conducted from May to June 2021.
“In our study, no major systemic Adverse Events Following Immunizations (AEFIs) were reported and the reactogenicity profile of the participants of the heterologous group was comparable to homologous CS and CV groups,” the authors stated.
These findings have an important implication for the Covid-19 vaccination programme wherein heterologous immunisation will pave the way for induction of improved and better protection against the variant strains of SARS-CoV-2.
“Such mixed regimens will also help to overcome the challenges of shortfall of particular vaccines and remove hesitancy around vaccines in people’s minds that could have genesis in programmatic ‘errors’, especially in settings where multiple COVID-19 vaccines are being used,” the researchers have stated.
The Indian Express