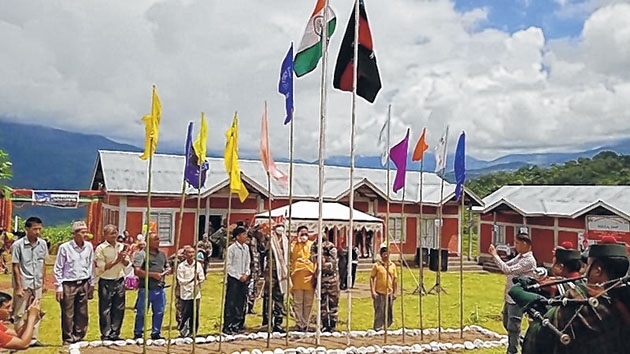 IMPHAL, Sep 1
As a part of 50th anniversary celebration of India’s victory over Pakistan in 1971 war, a football Tournament which will run till September 6 has been kicked off at Panikheti village in Kangpokpi district today in the presence of Commandant of 44 Assam Rifles, Kharga Tamang who is a member of Manipur State Minorities Commission and others.
The tournament is being organised by 44 Assam Rifles under the aegis of 22 Sect AR/ IGAR (East) in collaboration with AMGSU, Irang Part II unit, at Panikheti village, KPI district, said PRO of PIB (DW) in a statement.
A total of 14 teams would be competing in the tournament over the next six days and the AR unit has prepared the playground and provisioned sports equipment required for the conduct of the tournament, it said.
The winners shall take away the trophy and a cash prize of Rs 15,000 whereas runners up shall be awarded a cash prize of Rs 10,000. The Golden boot and golden ball players shall receive 2,500 each, it said.
The commandant of the 44 AR also inaugurated a six-day mega medical camp on the sidelines of the sports tournament for the local populace in collaboration with district medical authority. The unit doctors along with Dr Mohd Arif from PHC, T Waichong shall be checking up patients and distributing free general medicines at the venue itself, it said. All Covid protocol and CAB is being strictly followed during the conduct of the tournament, it said.
In commemoration of 50th anniversary of India's victory over Pakistan in Indo-Pak war of 1971 and celebration of 75 years of Independence of India, a similar football tournament was also organised by Noney Battalion of Assam Rifles under the aegis of  22 Sect AR and IGAR (East) at T Laijang village in Kangpokpi district.
The tournament which will culminate on September 7 was kicked off by social activist Paominhao Haokip in the presence of ISL player Seiminlen Doungel; SDPO Saitu, LS Khongsai and leaders of KSO and Kuki inpi, reports our correspondent.