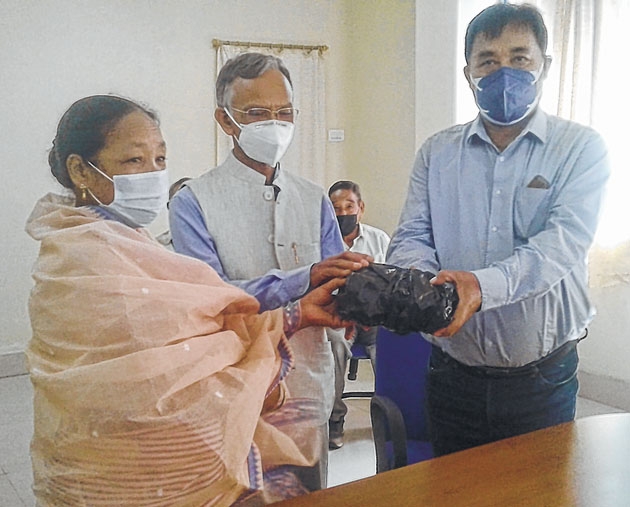 By Our Staff Reporter
IMPHAL, Sep 10 : Manipur Weightlifting Association secretary, Sunil Elangbam has expressed that Mirabai's financial assistance will provide a new thrust to the association and benefit the State players.
Sunil made the statement during a programme wherein Olympic silver medallist Saikhom Mirabai Chanu extended a sum of Rs 5 lakh to the Manipur Weightlifting Association through her mother. Mirabai could not be present at the occasion as she is reportedly attending a preparatory training camp at Patiala for the upcoming Commonwealth Games.
The simple programme held at the hall of Manipur Olympic Association was attended by working president of Manipur Weightlifting Association, M Lokendro Singh and other key members and coaches.
It is worth mentioning that four weightlifters groomed by the Manipur Weightlifting Association have proudly represented India at four editions of Olympic Games besides numerous weightlifters who had made their mark at the National and international events.
Th Sanamacha Chanu was the first from State to feature at the sporting extravaganza by representing India at the 2000 Sydney Games before Th Sanamacha Chanu and N Kunjarani featured at the 2004 edition of Olympics held at Athens and Mirabai Chanu represented India at Rio Games 2016 and recently concluded Tokyo Games 2020.