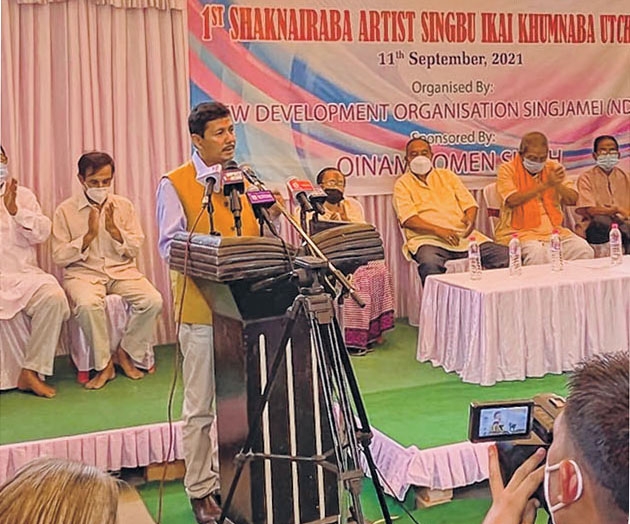 By Our Staff Reporter
IMPHAL, Sep 11 : Artistes of Singjamei Assembly Constituency (AC) were richly honoured today by social worker Oinam Romen in a solemn function organised by the New Development Organisation Singjamei (NDOS).
The honorary function was organised under the banner "Shaknairaba Artiste Shingbu Ikai Khumnaba Utchaba" at the residence of the social worker at Singjamei Oinam Thingel, Imphal West.
The function is first of its kind initiated by the social worker who is intending to contest in the upcoming Manipur Legislative Assembly election from the Singjamei AC.
Oinam Romen has been actively engaged in social work for more than a decade and has been reaching out to economically backward sections, meritorious students, differently-abled persons and destitute women and elderlies from different parts of the Assembly segment via pension schemes and scholarship programmes he introduced since the past many years.
During today's programme which was graced by Oinam Achou Singh and Oinam Thaba Singh as functional presidents, 154 artistes from different fields of art viz- music (modern, folk, classical), film and drama were felicitated with shawls, citation, mementoes and cash incentives exclusively sponsored by Oinam Romen.
Speaking at the occasion which was attended by many renowned personalities in the field of art and culture as guests, Oinam Romen stressed on the significance of honouring artistes.
"Artistes play a vital role in today's society by educating, informing and entertaining. Their work is about connecting people's emotions and sometimes it becomes personal and at the same time universal," he said.
"The role of artistes is colossal for they are contributing for the wellbeing of the society as a whole and thus honouring  and recognising their contribution is a must," he acknowledged.
Oinam Romen further said that the function of honouring the artistes was purely apolitical.
He has no intention to take political mileage with such a programme and it was continuation of honouring different outstanding personalities under the Assembly segment, he maintained.