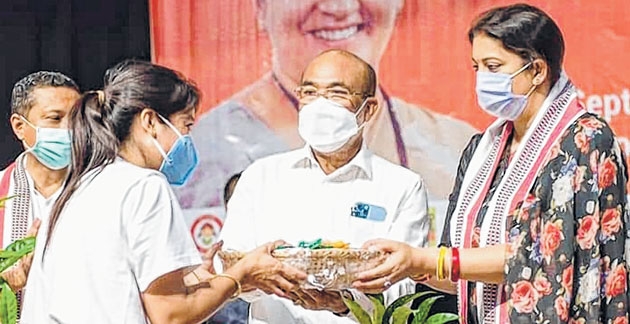 By Our Staff Reporter
IMPHAL, Sep 11 : Union Minister of Women & Child Development Smriti Irani has called for building a healthy Nation through the collective efforts of the Government and the public.
She was speaking as the chief guest at the Rashtriya Poshan Maah which was held today at the main auditorium, City Convention Centre.
Stating that malnutrition is a moral, social and economic malady, she said that eradicating malnutrition among children and women in  the society is the clarion call of the Prime Minister.
She said that nutrition is not limited to the level of Anganwadi functions and everyone must strive together by considering it as an “abhiyan”.
While appreciating Prime Minister Narendra Modi for taking up many welfare schemes and initiatives for women, Irani observed that the same Prime Minister stood at the rampart of the Red Fort and spoke of  the very basic needs of Indian woman, and this was something unprecedented in the history of India.
She went on to claim that 10 crore families in India had got toilet for the first time when Prime Minister Narendra Modi initiated a scheme of toilet construction for poor families in 2014.
The Union Minister asserted that around 3 lakh families in Manipur who did not have basic facility of toilet before 2014 had also reaped the benefits of the toilet construction scheme.
She added that 45 per cent of sexual assault on women happened when they went for open defecation.
Implying that nutrition is also a facet of sanitation, she said the Government has successfully made a mass movement on hygienic approach of cleaning hands before eating and keeping surroundings clean in the country.
Saying that accessibility to drinking water and sanitation among others are quite important when it comes to holistic health, Irani conveyed that 51 percent of the population in Manipur have now access to potable water.
She continued that the population accessible to potable water in the State four years back in Manipur was only 5.7 of the population of the State.
She also promised that the Central Government and State Government will jointly work to make tap water accessible to all the households in the State in the years to come.
Saying that collecting fire woods for cooking was a predominant challenge faced by the Indian woman at one point of time, Irani said that the Prime Minister has introduced the Ujjwala Yojana scheme that let 8 crore women in India, including 1,56,000 families in Manipur reap its benefits.
She said that holistic health, drinking water, Ujjwala etc are the entities that together form the Poshan Abhiyan and added that the same initiative/campaign is not limited to the Women & Child Development Ministry but a collaborative effort of 18 Ministries of the Government of India.
Mentioning about Yoga, she said that Indians have been celebrating the idea of holistic health for centuries.
“The intention of AYUSH is to focus on traditional methodologies of eating foods, bettering the internal body systems and engaging on the issues of malnourishment and countering anaemia among others.”
Observing that talking about menstrual hygiene for women was a social taboo in the past, she said many conversations that had been taboo in Indian society like menstrual hygiene are now accepted and supported by leaders including male leaders.
Further highlighting the achievements of the BJP led Government in the Centre and Manipur, the Union Minister said that the Central Government has provided food grains to all the citizens.
“People come together and choose a leadership that will put India first. And that leadership in partnership with people deliver to the people and tell the world that this is the democracy of the people, by the people and for the people”, she added.
Delivering the presidential speech, Chief Minister N Biren described Prime Minister Narendra Modi as a unique and far-sighted leader who understands the plights and problems of the poor women and people.
He stated that the cohesive efforts of the BJP-led Central Government and the State Government have brought many developments in the State.
Further highlighting the various schemes and achievements of the BJP-led Government in the State, Biren claimed that common people are now living in peace and tranquillity due to the improvement of law & order situation in the State.
He added that around 2000 students in the State have been identified for providing tablets to join online classes.
Rajya Sabha MP Leishemba Sanajaoba, Education Minister S Rajen, Advisor to CM MLA Dr Sapam Ranjan, MWCD Secretary Indevar Pandey and several other high ranking officials of the State Government also attended the function.
Nutri Kits and medicinal plants were also distributed to beneficiaries of Anganwadi Centres, Anganwadi Workers and Helpers during the event.