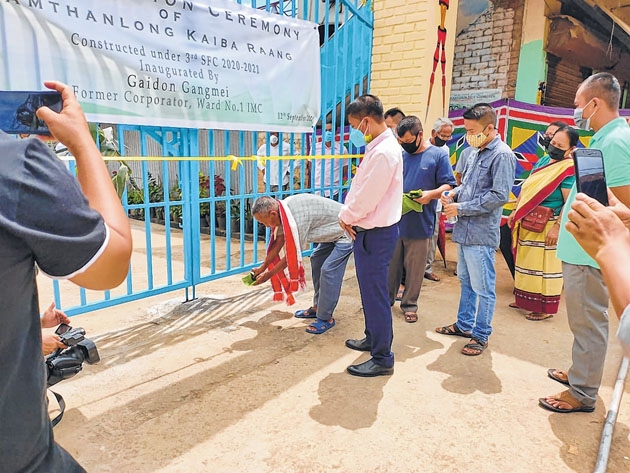 By Our Staff Reporter
IMPHAL, Sep 12: 'Namthanlon Kaiba Rang' (South Gate) of Namthanlon village was inaugurated today by Gaidon Gangmei, former Corporator of Imphal Municipal Corporation (IMC), Ward no 1 and handed over to the public.
The south gate of Namthanlon village was constructed under the sponsorship of State Finance Commission 2020-21.
Addressing the gathering, Gaidon Gangmei said that he has been able to achieve his vision to a great extent which is to carry out significant developmental works in the area of Ward no 1.
He also called for collective efforts from all while carrying out any form of developmental works setting aside political agendas.
Stressing on the need for honest and selfless efforts by the respective representatives for the development of a particular area, he said that the public should extend support and motivate the representatives concerned.
He also affirmed to serve the people of his respective ward and sought cooperation and support for the same.
Chief of Namthanlon village, K Gaimeibung expressed gratitude to Gaidon Gangmei for all the developmental works taken up by him and wished him success in all his future endeavours.